Who brings the mysterious flowers? 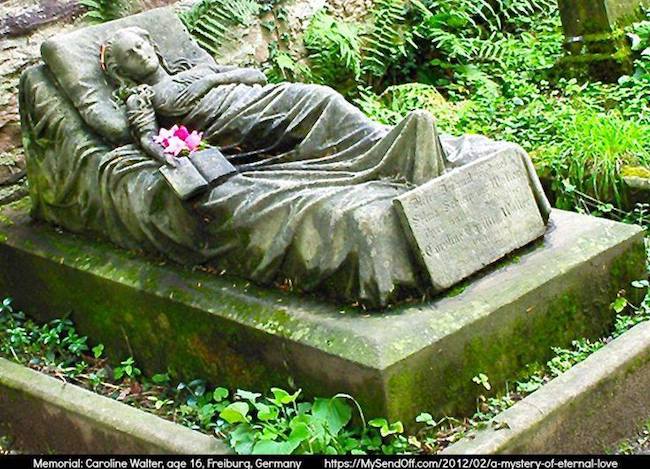 Who could have continued the tradition after all of the main grievers were gone from the earth?

The scourge of tuberculosis—in 1867, sixteen-year-old Caroline Christina Walters died as a result—in Germany.  She was young.  She was, oh, so beautiful.

She and her older sister, Selma, had just barely gone through the tragedy of losing their parents.  The girls were then forced to travel to Freiburg to live with their grandmother.  There, Caroline continued her education at a school for young women.  When Selma got married, Caroline then moved in with the newlyweds.

Caroline was so stunning that she already had a line of potential beaus, even at that young age.  When she met her untimely death, her devastated sister commissioned a sculpture to rest atop her grave.  It was life-sized and depicted Caroline resting in bed with a book, as she had often done in life.

It is a lovely statue that exists near the outer wall of the cemetery among lush foliage.  An inscription appears at the foot of the statue:  “This memorial was given by her sister, Selma, with love, and that her separation from her loved ones was determined by God’s counsel.”

Here is the mystery.  Every day for over 150 years, fresh flowers have appeared in the crook of the arm of the statue—the arm holding the open book.  No one knows who placed them there.

Legend and rumor have hovered around the tradition.

Could it have been Caroline’s tutor who brought the flowers religiously, a young man who was obviously smitten?

Who could have continued the tradition after all of the main grievers were gone from the earth?

Were future flower bearers enlisted by those originally grief-stricken?

This strange, rather romantic event takes its place among the roses left at the crypt of Marilyn Monroe—we know who did that, Joe DiMaggio—and the sentimental items left annually at the grave of Edgar Allan Poe.