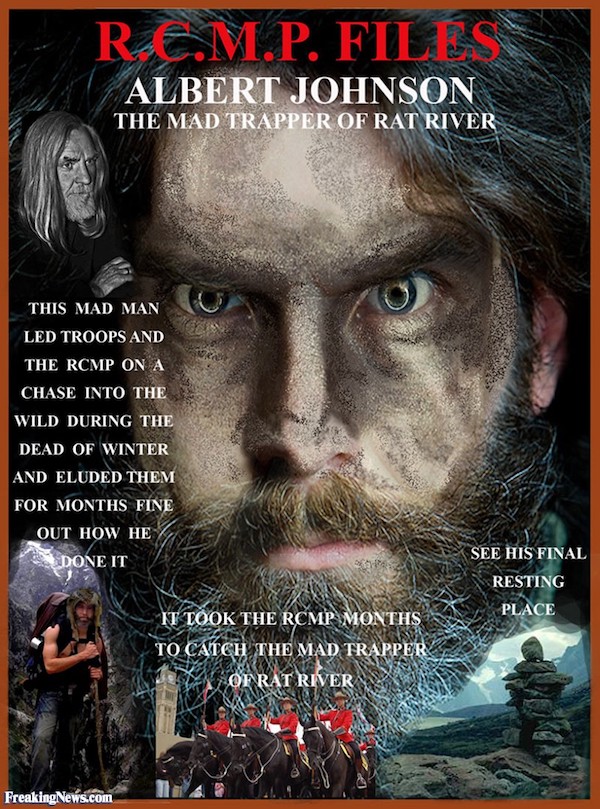 He was trying to survive in hard, desperate times, and all he wanted was to be left alone.

A huge mystery still sneers out from the past:  Who was Albert Johnson and where did he come from?

Rumors are all we have—and guesses.

Why did Albert Johnson behave the way he did?  Did cabin fever drive him mad?  Had he gone deaf and could not hear what the Mounties were calling out to him, the simple requests they were making from the other side of the door?  He seemed to be hiding something big, for sure.

Albert is thought to have been born between 1890 and 1900.  He is thought to be of Scandinavian descent.  His last known address was in the Yukon Northwest Territories of Canada near a section of Rat River.  How did the loner get there? Who were his parents?  When did they come to North America?

Those who first encountered Johnson in the outpost of Fort McPherson in July of thirty-one, found him to be cold and unsocial.  He did seem to hear talking and he answered—he was sparse with his words.  It was hard to concentrate on his few words because they were distracted by his light, icy-blue eyes. He had a Scandinavian accent and a smooth face, no growth of whiskers. He seemed to have enough money on him to make a number of purchases that a destitute person could not.

Wherever he came from, he went out and built a small log cabin in the trapping grounds near Rat River.  Trapping is how he survived.  He was an expert trapper, but over time, Albert had been called to the attention of the Royal Canadian Mountain Police for playing fast and loose with his trapping techniques and he did not have a required license to be a trapper in the first place.

The Loucheux peoples were the ones complaining.  They had found their own traps fouled and vandalized and they were certain it was he that was doing it.  The Loucheux had been prospecting and trapping in the area for years and their skills were more than famous.

The First Nations People, Loucheux, had fishing, hunting and trapping rights year-round, every season.  Others were required to get a license to do so.  In fairness to Johnson, The Great Depression had caused an influx of outsiders looking for ways to survive.  These people were also encroaching on the trapping rights, so it has not been substantiated, ever, that Albert Johnson was the guilty party.  It could have been any number of people.

Two Mounties showed up at Johnson’s on December 28, and he went into the house and would not communicate with them.  They hollered that he needed to get a license to continue trapping.  They wanted to go in but needed a search warrant so they told him they would be back with one.  It was a far distance, 128 km away.

When they came back on December 31, they were accompanied by two more officers.  Their hollered questions were answered with silence.  They persisted and were fired upon through the door.  Constable Alfred King was hit and seriously wounded.  He had to be loaded onto a dogsled and transported to the hospital far away in Aklavik.  Somehow, he did survive.

Albert Johnson’s overreaction to their visit had piqued the curiosity of the lawmen—surely this Johnson must be a dangerous man and he should be taken into custody.  Johnson had answered attempts to simply communicate with him with gunfire.

On January 10, the police decided to dynamite Johnson’s Cabin if he did not respond.  Dynamite?  One has to wonder if this was overkill, but that is what they did.  They returned with 20 pounds of dynamite, nine men, and 42 dogs.  When Johnson barricaded himself and resisted, they blew the roof off the cabin and it collapsed.  Surely Johnson could not have survived unscathed, but he did and fired upon them from the ruins.

The Mounties decided to go get more supplies and when they returned, they learned that Johnson was no longer there and had not left a trail—the snow had covered everything.  When they examined the ruins of the cabin they found that Albert had dug a deep trench in the floor of the cabin for just such an event.

That is what saved him.  He was clearly thinking of some kind of future standoff when he did this.  Now he was gone.  He was about to lead the Royal Canadian Mounted Police on a month-long manhunt at -43 degrees C, in an unforgiving land sometimes populated by man-eating beasts.

On January 14, a lone gunshot was reported by a Louchaux.  Was this Johnson?  They found him in a grove of trees and surrounded him.  He opened fire and killed Constable Edgar Millen with a shot.  Then, Johnson was on the move again.  He was brilliant at every turn.

He knew how to blend his tracks with the caribou trails and was able to start cooking fires in snowbanks to prevent detection.  One has to wonder where he learned these skills.  The Mounties were stumped, and turned to First Nations peoples for tracking assistance.  They knew he would try to leave the Yukon, so they even blocked the two sole passes over the Richardson Mountains.

This was not a problem for Albert Johnson.  He was able to scale a 7000-foot peak nearby, and they lost his trail again.  They would have to call in a plane.

The use of the plane eventually revealed the location of Johnson from above.  The men moved in and surrounded him.  He kept up the fight to the last minute, and even tried to run.  He could not move efficiently without his snowshoes.  On February 17, 1932, he was felled by a fatal shot to the pelvis.  He had not said one word throughout the ordeal and he had once covered 85 miles over the harsh terrain within a mere three days.

When they examined him they found on his person, $2000 in currency, gold, a compass, a knife, a razor, fishhooks, a dead, squirrel, a dead bird, and some nails.  There was also a good supply of Beecham’s Pills and some of his teeth had gold fillings.

Those people enduring the gloom of The Depression were temporarily distracted by the newspaper stories about the manhunt for Albert Johnson.  They felt a deep sympathy for him.  He was trying to survive in hard times—he wanted to be left alone.  In newspaper headlines, he was called The Mad Trapper of Rat River, and he is known as that to this day.

Post mortem photos of the trapper were circulated far and wide to try to find his true identity.  Nothing.  His body has been exhumed one time for examination and DNA.  He had some deformities to his spine and a foot, it was discovered.  These would have caused most people to be unable to move about with his skill.

The DNA has not tied him to any of the several people who were offered up as good candidates for Albert Johnson.  One person claimed to have seen him in another part of the Yukon using a different name before he built his cabin.  Some have described him:  not evil but desperate.  We have to wonder what The Mad Trapper was desperate about.  All of this is still a big mystery.