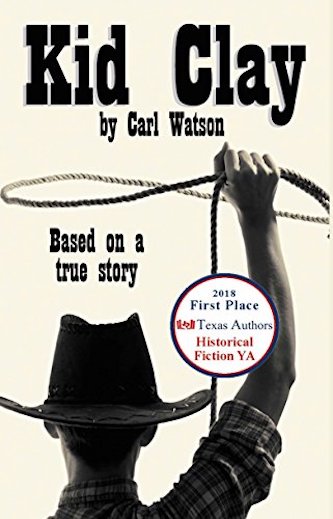 Was the West more than Kid Clay bargained for?

Kid Clay by Carl Watson has received the Best in Texas Book Award for Historical Fiction/Young Adult. The award is presented by the Texas Association of Authors.

Based on the real memoirs of Mr. Watson’s grandfather, this story follows Kid Clay through the Old West in search of a cowboy adventure. During his escapades, Kid Clay leaves his comfortable Kentucky home at the age of fifteen and sets out to discover what it’s like to be a real cowboy.

During this time, he encounters many colorful characters such as Indians, Buffalo Bill, and members of the Dalton Gang.

Along the wagon trail, he encounters typhoid, cattle rustlers, stampedes, bank robbers, and a beautiful Indian maiden. Kid Clay has the determination and bravery he needs to survive, but as he makes his way along the trail, he discovers that the West is beginning to change.

That’s when he makes a momentous decision that will affect the rest of his life.

Was the West more than Kid Clay bargained for?

Sampler from Chapter One:

Henry frowned and stared defiantly at the doctor.

“It’s typhoid,” said Dr. Jackson as he dropped his stethoscope back into his old, battered bag. He pulled a crumpled, brown neckerchief out of his back pocket and wiped the sweat off his forehead.

Maybe Henry was only fifteen, but he knew all about typhoid. Aching all over, he felt chills but at the same time was sweating from the heat. His dreams of coming west to be a Texas cowboy had not included this.

Henry heard Sheila gasp and her voice shook as she weakly muttered, “What can we do?”

Dr. Jackson sighed. “Ain’t much you can do and this heat don’t help none.” He cleared his throat. “Give him liquids, but no food. That’d kill him.”

The group moved away from the doorway, but Henry could hear every word they said through the curtain. Maybe they thought a kid that was sick would also be deaf.

Quietly, the doctor’s voice continued. “When you get right down to it, I’ve gotta tell you, he’s likely to last no more than a few days.” He added, “His folks ought to know.”

Sheila’s reply was tense. “But Doc, we don’t even know his name.”

“Look,” added Jim. “Sheila’s brother, Frank, is a trail-hand with an outfit heading to Kansas ‘cross the Injun Territory. The kid just showed up one day and seemed to know horses, so the boss took him on. When he got sick, Frank dropped him off here cuz there weren’t no other place to take him.”

“But didn’t you ask his name?” insisted the doctor.

Jim hesitated. “You know better’n that, Doc. Nobody’s asks their name when they hire on as a cowhand. In fact, them’s darn near fightin’ words in most outfits.”

Dr. Jackson sighed. “Under the circumstances you might want to ask him who his folks are.”

Henry stirred restlessly, his mind in a whirl. They were talking about him, talking like he was dying. Well, forget that! His mother had died from typhoid only three years past, in 1877, but that wasn’t going to happen to him. He didn’t leave his home in Kentucky just to end up in a squatter’s hut on the edge of a prairie.

Henry rubbed his eyes and struggled for every breath, He rolled off the straw pallet onto a hard-packed dirt floor. Mustering up every bit of energy he had, he started painfully crawling toward the curtain-covered doorway. The doorway was not far in this dark, windowless room, but every inch seemed a mile as he struggled to breathe and move at the same time.

“Wrong!” he gasped with all his strength. “Forget it, all of you. You’re wrong!”

The lantern and a pair of dusty boots pushed back through the curtain.

Defiantly, Henry shot a glance up the boots to Jim Lester’s startled expression, but the burst of energy faded, and the room began to spin like the insides of a tornado. Everything became a fuzzy blur. Slowly, a blanket of blackness dropped over him, threatening to smother him with its suffocating folds. Again, he gasped and crawled toward the door. If only he could get out under the stars, he could breath. There might even be a breeze. His head hurt, and the heat sapped all his strength, making it tough to move.

Someone stepped in front of him, blocking his way.

“The kid’s delirious,” said the doctor. “Let’s get him back to bed.”

Hands grabbed Henry from all sides and lifted him. He didn’t have the strength to resist. Exhausted, he closed his eyes, and the voices merged into mutterings like the roll of distant thunder. He felt a change. His pain and discomfort faded. Is this what it feels like to die, he thought. That can’t be. I’ve got things to do and places to go.

Suddenly, Henry heard a familiar voice. “Next case.” In the days that followed him getting typhoid, Henry heard many voices, but they were distant – not in his world.

Lifting his head, Henry glanced wildly about. Everything was different. He sat in a chair in the middle of a brightly-lit courtroom. His hands were tied. There were chains around his ankles. His father, the Honorable Demetrius Clay, sat perched behind a high desk peering down at him with a stern, critical expression.

The judge spoke, “Henry Clay, you have been brought before this court for being impertinent and refusing to follow your father’s instructions. How do you plead?”

“The defendant will address the court in a proper manner. We hereby declare you guilty of insolence and sentence you to jail for thirty days.” Judge Clay banged his gavel on the desk. “Next case.”

The Honorable Demetrius Clay rose to his feet. “Remove this prisoner!”

Invisible hands grabbed Henry by the shoulders and jerked him to his feet. They threw him through an open doorway into a void of silence. Opening his mouth, he tried to scream, but no sound came. He fell – fell through time and space. Blinding flashes blurred his thoughts and feelings, leaving him with no sensation except anxiety. He felt a thud and opened his eyes to find himself back in the small, musty, dark room.