These girls are FUN, even when confronted with horrible situations — including magic and witchcraft — they learn what truly matters.

Maybe magic. Maybe trouble. Homeschooled siblings April and June Bliss are inadvertently sucked into their older cousin Arlene’s troubled life when that street-savvy 17-year-old disappears and then sends for their help via an inscrutable grimoire and a mesmerizing silver ring.

Although new to the realm of magic, the sisters concoct an assortment of spells (not altogether successfully) as they attempt to find and rescue wannabe sorceress Arlene. Throughout their journey, smart April and brash June explore family values, encroaching maturity (April’s been spying on dishy Justin Fink with a treehouse telescope) and their own stubborn differences.

But when life in an adult world takes a turn toward the supernaturally spooky, the two must quickly pull together in order to survive. What is an appropriate sacrifice for family, and what is too much to give for a worthy cause?

The girls soon find out what truly matters in life. 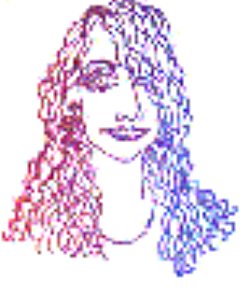 April, Maybe June is the first book in her Bliss Sisters Magical Adventures series. Shalanna, maybe Denise, graduated from Southern Methodist University with a BS in Computer Science and a BA in Mathematics.

When she isn’t writing fiction, she tutors secondary school math, works as a literacy volunteer, does research on the Internet, and noodles on the piano. Like many Texans, she doesn’t intend to be funny, but often puts her own twisted spin on whatever she’s observes.

If teenagers — in suburban Dallas or anywhere else — were as charming as sisters April and June consistently are, I suspect the population of the United States would quickly swell to 600 million.

These girls are FUN, even when confronted with horrible situations — among which magic and witchcraft and a pair of insufferable helicopter parents, with an out-of-control cousin thrown in for good measure, figure hugely. Perhaps Shalanna could write an amusing book about toenail clipping . . . I wouldn’t put it past her.

Everything is in here. Humor, pathos, and even a never-mentioned play on the title’s words that resonate through one scene, where April is abducted when the victim they (the bad guys) really wanted was June.

So, we get APRIL MAY BE JUNE as an alternative thought. I may change my mind later on, but I see this book as one to be reread many times, because I’ll bet you there are more hidden nuggets in there than even half a dozen times through could expose.