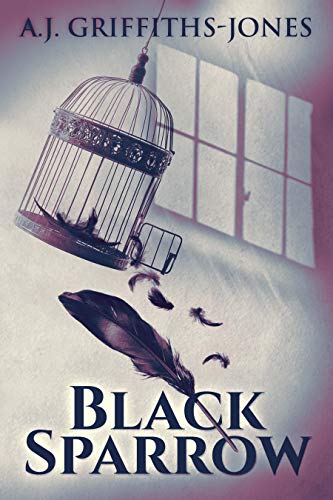 The characters were delightfully done, the pace was amazing and the story was weaved exactly how it was supposed to be done.

At Heathrow airport, a hired assassin is boarding a plane to Paris. On the same plane is young Uzma Rafiq, heading for a new life with her French lover.

The passengers carry identical suitcases, but their motives for traveling to the European city couldn’t be further apart.

When they accidentally pick up the wrong luggage on arrival, a deadly series of events is set in motion.

As a sinister twist brings them together, they will dictate each other’s destinies.

Against a backdrop of The City of Lights, who will survive?

A.J.Griffiths-Jones was born near Shrewsbury, Shropshire. She has traveled extensively in her career and has recently returned to England after ten years working as Language Training Manager for a prominent bank in Shanghai.

A.J. has studied genealogy for many years and has a special interest in the world of Victorian crime.

After researching the life of notorious poisoner Dr.Thomas Neill Cream for many years, her debut book ‘Prisoner 4374’ was published in May 2015.

She is currently working on a second ‘Jack the Ripper’ related book, together with a series of novels.

Normally I start my review with the main character. However, this novel has a few

I will start with Farida who is a Muslim woman with a husband, two kids and who live in London. She is saving money on the side unknown to her husband. After years of marriage, she has gained weight and is in a marriage that is another but loving.

Uzma, her daughter, is interested in art and also her art teacher. Stealing money from her mom’s secret account she runs away to Paris to meet up with her lover. The problem being she has not told him he is coming. Arriving at her destination her luggage gets picked up by another passenger. She has his now.

Colin Foster, who has mistakenly taken Uzma’s luggage, goes about his business and to his destination-Collette Joubert’s hotel. He wishes more than a friendship with her.

What Uzma has left behind is a hot mess. Her parents are frantically trying to find her and their shambles of a marriage continue to disintegrate.

The Black Sparrow soon has his next job. What he does not know or anyone else in Paris is that he was hired by Uzma’s dad to do away with her lover who has now disgraced his only daughter.

This book had me turning the pages quickly as I wanted to know what was going to happen next. The characters were delightfully done, the pace was amazing and the story was weaved exactly how it was supposed to be done.

The ending was perfect.