Featured: Chronicles of Aveline: Love and Blood by Ken Fry 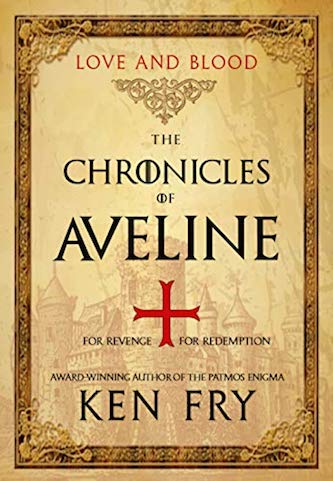 A saga of love, history, adventure, and suspense.

After escaping from a life sentence at a convent, Lady Aveline of Froulingham fulfills her ambition of linking up with King Richard’s forces in the Holy Land. Her quest is to find her former lover, Sir Quentin de Ballon, sentenced by the Church to fight in the crusade for thirteen years as punishment for their illicit love affair.

Aveline finds herself in the midst of the war between Richard the Lionheart’s and Saladin’s armies, as they battle for control of Jerusalem. She quickly earns the monicker, The Green Devil — feared by Saladin’s army for her formidable skills with sword and bow.

But… they do not know she’s a woman.

As her search for Quentin continues, her love wavers when she finds herself increasingly attracted to a protective French knight, Sir Guy de Toulouse. Together with her squire Athlestan, he has been her companion throughout her long sea voyage to the Holy Land.

Can her love for Quentin withstand the cruelties of war?
How can she continue hiding her true identity from the king when she is asked to join the King’s Guard?

Bestselling, and multi-award-winning British author, Ken Fry, holds a university Master’s Degree in Literature and has traveled around the world. The places and events are reflected in his stories and most of his tales are based on his own experiences.

He has extensive knowledge of the Art world, which he acquired while working as a Publisher in a major UK publishing house — a wholly owned subsidiary of the HEARST Corp of the USA. In his thirteen years with the company, he worked within the Fine Arts and Antiques division of the organisation and controlled four major international titles.

He is now retired and devotes his full time to writing. He lives in the UK and shares his home with ‘Dickens’ his Shetland Sheepdog.

Praise for Chronicles of Aveline:

“The story is well crafted, making use of suspense and anticipation to heighten the reader’s engagement in the story as the tale progresses, and maintaining an emotional involvement in Aveline’s inner life as well as her physical fate. The writing is vivid and sensory, bringing the characters and settings to life in a most enjoyable manner.”

“Fry’s writing, as always, is superb, with descriptions that made me feel more like I was watching the story unfold in front of me, than merely reading about it.”

“I was very surprised by how skillfully Ken Fry has dealt with having a central female character; it felt as if I was reading the work of a female author. The story unfolded at just the right pace, was intelligent and I do hope that a sequel will appear before too long.”