Featured: Echoes of the Runes by Christina Courtenay 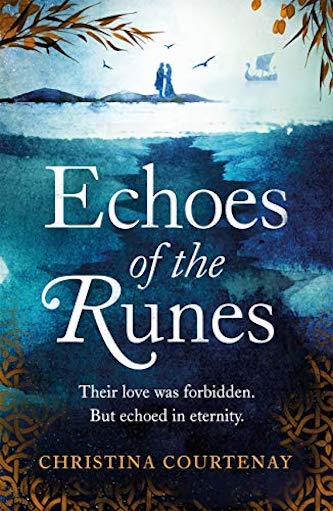 Their love was forbidden. But echoed in eternity.

When Mia inherits her beloved grandmother’s summer cottage, Birch Thorpe, in Sweden, she faces a dilemma. Her fiance Charles urges her to sell and buy a swanky London home, but Mia cannot let it go easily.

The request to carry out an archaeological dig for more Viking artefacts like the gold ring Mia’s grandmother also left her, offers her a reprieve from a decision – and from Charles.

Whilst Mia becomes absorbed in the dig’s discoveries, she finds herself drawn to archaeologist Haakon Berger. Like her, he can sense the past inhabitants whose lives are becoming more vivid every day.

Trying to resist the growing attraction between them, Mia and Haakon begin to piece together the story of a Welsh noblewoman, Ceri, and the mysterious Viking, known as the ‘White Hawk’, who stole her away from her people in 869 AD.

As the present begins to echo the past, and enemies threaten Birch Thorpe’s inhabitants, they will all have to fight to protect what has become most precious to each of them…

Christina Courtenay lives in Herefordshire in the UK and is married with two children. Although born in England she has a Swedish mother and was brought up in Sweden. In her teens, the family moved to Japan where she had the opportunity to travel extensively in the Far East.

Christina is a former chairman of the UK’s Romantic Novelists’ Association (RNA). She won their Elizabeth Goudge Trophy for a historical short story in 2001 and the Katie Fforde Bursary for a promising new writer in 2006.

The Secret Kiss of Darkness (time slip) and the sequel The Soft Whisper of Dreams are is her latest books. As well as her novels, Christina has had four Regency novellas published, all available in Large Print and three of them on Kindle (individually or as a collection).

Christina also writes contemporary YA and New England Rocks was shortlisted for the RNA’s awards in 2014. The second book in the series, New England Crush, was published under a different name – Pia Fenton.

When she’s not writing, she spends her time tracking down elusive ancestors for her family tree, and her other hobbies include archaeology (the armchair variety), listening to loud rock music, and collecting things.

You can learn more about Chistina at her Website – www.christinacourtenay.com

Praise for Echoes of the Runes:

The pacy, evocative, and romantic new dual-time novel from Christina Courtenay is perfect for fans of Barbara Erskine, Diana Gabaldon’s Outlander and Vikings.

‘Wow! This book should come with a warning! It’s almost as addictive as chocolate!’ 5* reader review

‘Fabulous. Highly recommended for fans of Barbara Erskine and Susanna Kearsley – and if you want a thumping good read’ 5* reader review

‘A rich, dual-timeline story that totally drew me in’ Sue Moorcroft

‘A fabulous adventure, with characters I loved!’ Jo Thomas

Please click HERE to find Echoes of the Runes on Amazon.