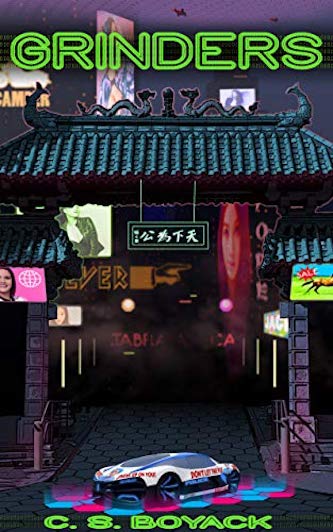 A tale about the future of the Earth, human choices, and paths not taken or taken too late.

Jimi Cabot made one mistake as a starving college student. When she went to work for the San Francisco Police Department, it nearly cost her the job. The union stepped in and they had to reinstate her. They did so by assigning her to the duty nobody wants, Grinder Squad.

Grinders are people who use backroom surgeries to enhance their bodies with computer chips and various kinds of hardware. Jimi is sure that if she can just bust one grind shop, it will be her ticket back.

Paired with a veteran cop, she soon learns that Grinder Squad is a cash-cow for the department. They are nothing more than glorified patrol cops and generally get the worst assignments.

Matchless is the most wanted grinder of all time. He disappeared years ago, leaving only the evidence of those he enhanced during his career. With these pieces, Jimi picks up the cold trail to try working her way back to more respectable duty.

Grinders is a cyberpunk story set in a world where global warming has eroded coastlines, and society has solved many of our current problems by replacing them with new ones. There are cyber shut-ins, cyber-currency skimming schemes, and more in this futuristic tale.

This book also takes the opportunity to poke a stick at current issues that seem to have lasted into the future. Entitled people, helicopter moms, overzealous homeowner associations, and lack of decent jobs are all present.

Never preachy, these issues make up the day to day work of a patrol officer.

I was born in a town called Elko, Nevada. I like to tell everyone I was born in a small town in the 1940s. I’m not quite that old, but Elko has always been a little behind the times.

This gives me a unique perspective of earlier times, and other ways of getting by. Some of this bleeds through into my fiction.

I moved to Idaho right after the turn of the century, and never looked back. My writing career was born here, with access to other writers and critique groups I jumped in with both feet.

I like to write about things that have something unusual. My works are in the realm of science fiction, paranormal, and fantasy. The goal is to entertain you for a few hours. I hope you enjoy the ride

Boyack’s done it again. I have no clue where he gets his ideas, but his well certainly hasn’t run dry.

GRINDERS introduces us to people who illegally modify their bodies with technological upgrades and the police squad tasked with stopping them. Sort of. Really, the grinder squad is a punishment for cops and no one really seems to care that people are paying for enhancements.

Lou is a vet, marking time until his retirement. He’s partnered with Jimi, a young cop with a mistake in her past and a desire to make her way out of the grinder squad—by making a huge grinder bust.

The interplay between Jimi and Lou is stellar. She makes the grizzled cop care a little more, and he teaches her patience and wisdom. Typical mentor/mentee relationship, right? Wrong. This is so much more.

There’s humor, there’s poignancy. There’s a real emotional connection, both between the two of them and between them and the readers. Throw in an exceptional cast (both real and virtual), and you’ve got a full and diverse pool of characters.

The villain is driven and a tad demented. I loved viewing the world from his perspective. And the POV at the end (which I won’t spoil) was a HUGE payoff for me. It really brought everything together in a clever and satisfying way.