Featured: Innocent to the Last by C.A. Asbrey 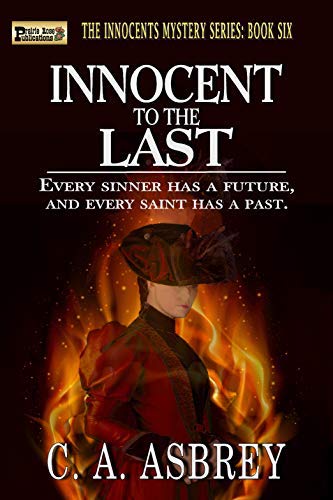 Nat, Abigail, and Jake are hot on the trail of the mysterious man behind the scenes who orchestrated the murder of baby Ava. Determined to bring her killer to justice, they are prepared to do whatever they must, no matter where the clues lead.

Rebecca, an attractive newspaperwoman investigating the same deadly gang of criminals brings complications into the mix for their plans—and for Jake’s heart.

With a slew of hired killers on their tails, the stars align when they bump into Nat and Jake’s old gang, The Innocents, in the midst of a train robbery.

They strike a reluctant deal with The Innocents to take refuge in their old hideout at Ghost Canyon—at a price.

Abi’s ability to break into a new type of armored car, one containing a rumored “golden boy” statue, gains them their refuge and buys them some very limited time.

When the hired killers show up at Ghost Canyon, there’s hell to pay with the surprise attack Nat has devised. If Jake survives, will he be able to find peace—and love—with his heart’s desire, at last?

Can Nat and Abi deliver retribution for the death of their young daughter?

In a story filled with surprise villains, unexpected love, and gut-wrenching action, these twists and turns keep Nat, Abi, and Jake INNOCENT TO THE LAST…

She likes her mysteries twisty, complex, and intricate; through a fog of history and a touch of light humor.

She is a writer of mysteries and a fan of all things Victorian and obscure, topped off with interest in early forensics, science, music, jaywalking, ordering the best meal at the table in a restaurant and dropping out of society to do whatever she wants.

She enjoys an eclectic mix of the old and new, foreign and obscure, funny and dramatic, so includes these elements in her writing.

She loves finding gadgets that were invented earlier than popular wisdom accepts, especially when they involve the spying and scientific techniques of the past.

If you are looking for historically accurate mysteries laced with vivid characterizations, romance, and compelling plots, these are the books for you.

Abi, Nat, and Jake are hot on the trail of the mastermind and his devious network who specializes in the trafficking of humans, goods, and murder…

The death of their baby daughter, Ava catapults their investigative energies and expertise into high gear. They want the carnage to stop and to take revenge for their young daughter’s demise—will they be able to stop the scoundrels before more tragedy is inflicted?

A run-in with a newspaperwoman who is out to expose the crooked men in the community who have destroyed her family’s paper ignites unexpected feelings for Jake.

Rebecca Kershaw, aka Becky, is determined to seek justice for the family business, but is in way over her head–will Abi, Nat, and Jake be able to help her?

Sparks fly and hearts flutter between Becky and Jake, but his turbulent past causes her concern. Decisions must be made–will Becky and Jake make the right choices?

This is the sixth and final book in Author Asbrey’s The Innocents Mystery Series. I have thoroughly enjoyed this series–the characters are a delight; the plots adventurous; and the descriptions of the settings and technologies engaging and innovative for the time period.

Many dangling dilemmas are resolved in this final tale–and I wish nothing but the best for the characters as they enter a new phase of their fictional lives.

Please click HERE to find Innocent to the Last on Amazon.