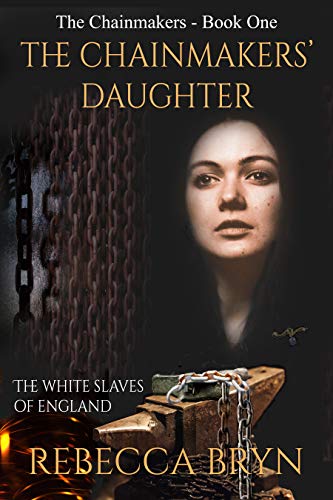 Some make chains. Some wear them.

Rosie Wallace survives on three slices of bread a day. Scarred by flame and metal, she makes her life as her ancestors have: making chains for the rich chain master, Matthew Joshua. There is no hope for a better future. No hope even for a green vegetable on the table.

Her life will be making chains, marrying Jack, the boy she loves, and babies every year. But when an assault by the chain master’s son threatens the very fabric of her tenuous existence, Rosie finds the courage and the reason to fight for her own survival and the lives of her family and neighbours.

Pay for women is poor, and despite working ten or twelve hours a day, starvation wages keep the chainmakers in abject poverty, while the chain masters reap the profit.
Hearing that in London, agitator and socialist, Mary Macarthur, is lobbying parliament to end sweated labour,

Rosie writes to her, begging her help in their desperate plight, but can one person unite the women chainmakers of Hawley Heath to strike for a living wage and defeat their rich and powerful chain master, who refuses to pay the legal wage?

Can the white slaves of England defeat the chain master, or will Rosie’s ill-considered liaison with the chain master’s son lose her the man she loves and possibly end her life on the gallows?

A Victorian/Edwardian political social drama, The Chainmakers’ Daughter exposes the living conditions of working-class women and girl’s in the early 1900s. Mary Macarthur, a socialist and the first woman to stand for parliament, founded the Anti-Sweating League, the National Federation of Women Workers, and was instrumental in getting the 1910 Wage Board Act and a legal minimum wage into law.

It was a fight that took many years and culminated in the women chainmakers’ strike of 1910, a strike that lasted two months. A family saga, this is the story of the fight of ordinary working women for a fair day’s pay for a fair day’s work that paved the pay for a national minimum wage and equality for women.

Surrounded by stunning coastal and moorland scenery, she also loves to paint. She inherited her love of stories from her grandfather, who told stories with his hands: stories with colourful characters and unexpected endings.

Her fascination with what makes people who they are, and the belief that life is many shades of grey, informs her writing. A Native American Indian proverb reads, ‘Don’t judge a man until you have walked two moons in his moccasins.’

Rebecca has based her life on this tenet: it is certainly core to her writing. ‘We may not condone what a person does, but sometimes, we can understand and maybe come to forgive.’

Her stories are raw, honest, and thought-provoking. In 2019, she won the IAN Fiction Book of the Year prize, the IAN Outstanding Historical Fiction prize, and the Readers’ Favorite Gold Medal for Historical era/event Fiction.
She has also written a comprehensive guide to painting Watercolour Seascapes. http://mybook.to/WatercolourSeascapes under the name of Ruth Coulson.

Rebecca Bryn has two gifts that are essential to the writer of historical novels: persistence in research and an understanding of what makes people tick. Many of her protagonists are women with a strong sexual urge, an urge that inevitably brings them into conflict with the societies in which they live.

Several of her previous novels have drawn on the history of her native county, in the East Midlands of England, as well as her own family history. This time she has turned her attention to the English West Midlands where, in 1910, women chain makers staged a strike for improved pay and conditions.

The harrowing conditions of life and work for these women is described in heart-rending detail. Long before health and safety at work legislation, men and women worked long hours for little pay and even less protection from the heat and other dangers of a forge.

Women who had no access to child care had no option but to take their children to work. This was no annual treat for kids, being given the chance to see what mummy or daddy does in the daytime. Infants were bound to their mothers wielding a hammer on hot metal. Children as young as four operated the bellows to supply oxygen to the furnace.

Bryn’s main character, Rosie, is 10 at the start of the book, in 1901. By the end, in 1910, she is a young woman with a husband and 3 children, still making chains for a pittance, but now also a political activist, organising her colleagues in opposition to the wealthy industrialist who controls every aspect of their lives.

To her credit, Bryn gives due weight to the boss’s side of the debate as well as that of small traders who rely on the chain makers for their business. And the boss develops a soft spot for Rosie’s husband Jack. I’ll say no more on that score for fear of spoiling the story. Suffice to say that, if the opening chapter makes you seethe with anger, the ending will have you weeping tears of a different kind.

What makes this book so devastating, apart from the brilliantly evocative language, is the realisation that this is how some of our female ancestors lived little more than a century ago. If you thought the Dagenham women of fifty years ago were pioneers of equal pay, think again.

Sixty years before them, the women chain makers of the West Midlands, encouraged and led by Mary Macarthur, paved the way with their strike for better pay and conditions. And yet, even now at the start of the third decade of the twenty-first century, there is still a very real gender pay gap.

A highly recommended book for anyone in search of stories of our past and the struggles of women to achieve proper recognition and respect for their contribution to society.

Please click HERE to find The Chainmakers’ Daughter on Amazon.