Featured: The Fixer by Morgan Nyberg 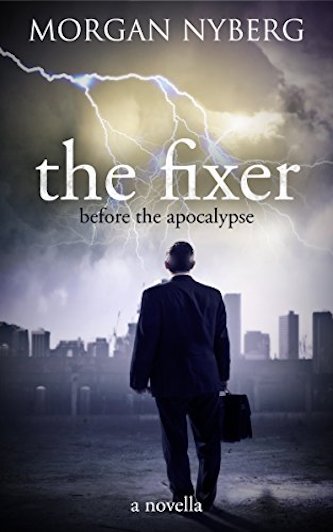 Share the plight of Smith, an international problem solver caught in a terrifying plunge toward the death of civilization.

This is how the end begins!

It happens in one apocalyptic year.

Famine and pandemic ravage the planet.

Share the plight of Smith, an international problem solver caught in a terrifying plunge toward the death of civilization.

Smith travels the world trying to save businesses.

He knows profit and loss.

But when it comes to fear, he’s as helpless as you or me.

Join Smith now for the final, heart-rending months of his journey.

The Fixer is a Post-apocalyptic Short Read.

“One of the best series in the post-apocalyptic genre, hands down.”

“An exquisitely formed vision of a broken world.”

“On a par with McCarthy’s The Road.”

“The best I’ve read in a post-apocalyptic setting.”

“This book (Since Tomorrow) stunned me with its power and richness.”

“Far and away the best of its genre.”

Before writing the Raincoast series Nyberg had been a poet (The Crazy Horse Suite), an award-winning children’s author (Galahad Schwartz and the Cockroach Army; Bad Day in Gladland), and a literary novelist (El Dorado Shuffle; Mr. Millennium).

He had worked and lived in Canada, Ecuador, and Portugal. He was teaching English in the Sultanate of Oman when he felt the need to confront in fictional form the ecological crisis facing Planet Earth. The Raincoast Saga, many years in the making, is the magnificent result.

“This is the way the world ends, not with a bang but a whimper”…T.S. Elliot could have been writing about this book in the last lines of his poem, “The Hollow Men.”

This phrase perfectly describes this story–the mood it conveys. I rarely read this type of book but I know that this one is a great backdrop and introduction to the Raincoast Saga series of books.

It’s a fascinating look at the end of the world as we know it and the one man who denies that it’s happening.

It’s not a fun read but certainly makes the reader think…so I’m sure I’ll read the series to find out how (and if) civilization heals itself.

Please click HERE to find The Fixer on Amazon.