Featured: Voices in the Wind by Stephanie Parker McKean 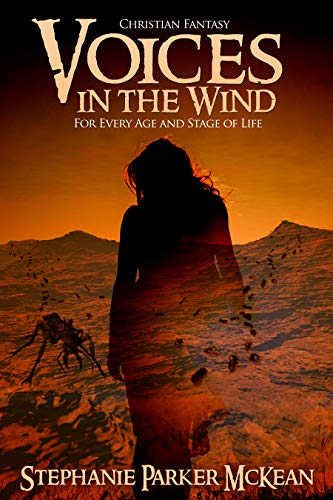 Even deadlier, Rhoda faces the truth about her past and the age old question: is God real?

A Christian fantasy for every member of the family.

Two accusations of murder against her, a lack of belief in God and a loveless marriage cause Rhoda to label herself as “unlucky,” so when she hears voices in the wind, she follows them.

Rhoda finds herself in a land that exceeds all her dreams and expectations, as do the two men vying for her love—rain man Tal and sun man Victor.

She could have it all, but Treasury is God’s secret holding place for rain and wind. Rhoda must prove herself worthy to the Protectors who guard Treasury.

To prove her worthiness, Rhoda must ascend dangerous Verboten Mountain to bring back a jar of dry dirt. Verboten is as forbidden as its name and to succeed in her quest, Rhoda faces warlike cave men, dinosaur birds, enormous serpents and an army of Great Dane-sized Bullet Train Ants.

Even deadlier, Rhoda faces the truth about her past and the age old question: is God real?

I’ve survived being bitten by a water moccasin snake.

I’ve emerged victorious from having been sexually abused as a child. Fleeing that abuse, I lived under a bridge. Now instead of living under a bridge, I use them as titles for my Texas Miz Mike “Bridge” series, humorous mystery-romance-suspense novels.

I’ve learned that what doesn’t make you bitter makes you better. You really can’t make lemonade without lemons.
And thank God, I’ve made the transition from atheist to Christian. My two favorite Bible verses are: in everything give thanks; and all things work together to good for those who love the LORD.

I used to think that the worst day in my life was the day I lost my job; my mother died and I couldn’t attend her funeral because my husband was sent home from the hospital to die; our sheepdog died, and my truck caught on fire in downtown San Antonio.

Several years later, I learned what a really bad day is. My son, USMC Major Luke Parker died in a plane crash on November 17, 2013. It doesn’t get worse than that. “Bridge Beyond Betrayal” is dedicated to Luke.

I’m now married to wonderful Alan McKean, author of historic time travel books. He retired as a Church of Scotland minister after 35 years in the pulpit and we moved to Dunoon, Scotland. But I bet you want to hear more about the lion.

First, I was born in Texas, which was at that time the biggest state in the U.S. I learned at an early age that everything in Texas is bigger and better. When Alaska became a state, I cried. But what about the lion?

Along with an innate pride for Texas, I was born with a love for animals. When I was five, my first pet was a grasshopper that I carried around on a silver spoon. When I accidentally dropped spoon and grasshopper down the radiator in an upstairs apartment building, I sobbed. My mother sobbed too. The spoon had been a wedding gift.
History repeated itself when my five-year-old son’s pet grasshopper was consumed by a small spider. Luke sobbed inconsolably. That experience inspired me to write what is my newest book at the moment, “I’m the Grasshopper.”

But back to the lion.

My love for animals led to the snake bite. Because I was an unpopular child, I made pets out of snakes. Other girls were afraid of them. Riding a bicycle with a snake around my neck made boys notice me. (They thought I was crazy.) The day after I appeared on a local television show explaining how to tell a poisonous snake from a harmless snake, I was bitten by a cotton mouth. Now, finally–the lion!

Ebenezer arrived in the back of a station wagon to join our family’s roadside zoo, a collection of animals that included opossums, raccoons, assorted harmless snakes, a fox, a large boa constrictor, monkeys, a skunk, and a jaguarundi. The 200-pound pet fit right in with our family, until he reached 400 pounds and became a lion.

Sadly, when I became mature enough to quit riding bicycles with snakes in my quixotic attempt to impress boys, I remained immature enough to use a gimmick like an African lion. I invited a fellow college student home to see Eb. Not realizing that Eb had transformed from pet to lion, I walked up to him. Eb grabbed me by the stomach, threw me to the ground, and mauled me. My terrified college friend jerked me out of the cage–which made Eb bite even harder because he was about to lose his toy. “I hope I did that right,” Ed panted. “I’ve never had to rescue anyone from a lion before!” I never saw Ed again.

And now you know about the lion. And when you read the Texas Miz Mike Christian mystery-romance-suspense novels set in Three Prongs, Texas, where the misfits fit, you’ll know more about Texas.

And hopefully, you’ll learn how to make lemonade out of lemons. Because what doesn’t make you bitter makes you better. With God’s help, all you need to add is a little prayer, a little praise…a little sugar.

It was fantastic from beginning to end!!! It has a beautiful story, wonderful characters, and vivid writing.

Since I love animals, my favorite character is Jackson the squirrel. He is very entertaining. I love the ending.

Great message! I would definitely recommend this book to others.