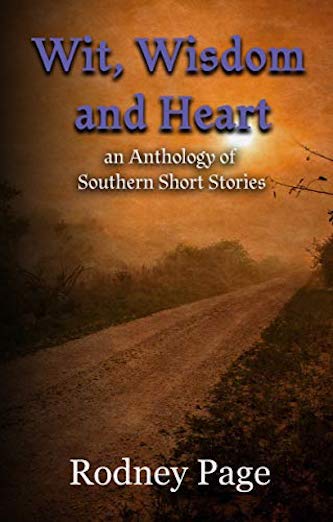 Wit, Wisdom and Heart is an anthology of thirteen eclectic short stories about Southerners that will take you on an emotional rollercoaster ride.

A smart-aleck ghost on North Carolina’s Outer Banks will have you laughing at his journey to the hereafter…and back.

You’ll experience the pain of lost loved ones as a widow and widower try to overcome the tragedy of Hurricane Katrina. An aging baby boomer fighting severe depression asks an eternal question: Is life worth living?

Do evil people get what they deserve? And, do nosy small-town busybodies ever receive their just comeuppance?

The horror of war, no matter when fought, leaves deep and permanent emotional scars. Whether a teenager fighting for the South in the Civil War or a World War II bomber pilot, a warrior’s life is never the same after battle.

A Georgia native, Rodney’s business career included a variety of senior management positions and consulting engagements in companies and industries ranging from startups to Fortune 50 firms.

A graduate of the Grady College of Journalism at the University of Georgia, in 2005 Rodney authored Leading Your Business to the Next Level...the Six Core Disciplines of Sustained Profitable Growth, a hands-on guide for companies navigating the perils and pitfalls of a high growth environment.

Published in Spring 2016, Murcheson County, a sweeping saga of four families in antebellum Georgia, spans sixty years during our country’s most turbulent times.
And, The Fourth Partner, a murder mystery set on the Georgia coast, launched in September 2016.

The Indomitable Ms. Smythe, a suspense/action/thriller chronicling the exploits of a feisty and irreverent congresswoman and her brother, a CIA operative, launched in June 2017.

Lastly, Macon – the Novel, a dark story of murder and cover-up in the deep South in the 60s, was published in July 2018.

Projects currently underway include: By the People, For the People, a political thriller, and an anthology of short stories.

Rodney’s books are published under the general theme, ‘Southern Voices’…characters that showcase Southerners’ wit and wisdom, uncommon common sense, little use for the conventional and boundless resilience.

Rodney lives in Hendersonville, North Carolina. His passions include woodworking, history, R&B guitar, and bass guitar, and, of course, University of Georgia football.

Wit, Wisdom and Heart – This is an interesting collection of twelve short stories that tell bits and pieces of life in Georgia. They range from heartwarming to heartbreaking, covering a gamut of emotions. The time periods range from the American Civil War to the present.

The writing style is easy to read, in a comfortable storytelling way. All that’s needed is an iced tea, and maybe some tissues. I stopped reading partway through because I did not want to wolf these stories down, back to back.

I want to experience them spread out; something to read after experiencing a not so well written Indie story. There is nothing wrong with reading cover to cover in one sitting, but these are really good stories that a bit of savoring is required.

In Page’s signature journalistic style, we’re introduced to a host of characters including a pair of lovers finding solace and hope in each other post-Katrina, an angry matriarch refusing to change in a small town in the flat-lands of SW Georgia, and a veteran dealing with the demons of war, loss, regret, and age in coastal Georgia.

Page has a gift of pulling details from the past and allowing them to soak into his prose, letting the reader live there.