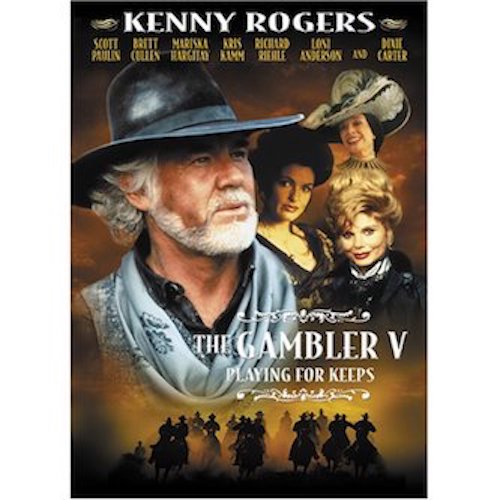 My writing partner, Frank Q. Dobbs, and I were asked to write the script for the fifth episode of the famed Gambler television series.

I had a passing acquaintance with Kenny Rogers.

But there was no doubt about the circumstances.

I was the writer.

He was the star.

I wrote the dialogue.

His voice made it special.

His voice had a distinct ring to it.

Back in another lifetime, my writing partner, Frank Q. Dobbs, and I were asked to write the script for the fifth episode of the famed Gambler television series.

This one was special.

This one would be a two-night miniseries on CBS.

Well, here’s how it really happened.

My writing partner was working as a producer for Larry Levinson Productions in Hollywood.

He asked Frank to write the script.

Frank had been dabbling in Westerns since he first started writing scripts for the old Gunsmoke series.

Frank was a great storyteller.

But he didn’t like being chained to a typewriter and knocking out a script on deadline.

He called and asked me to write the script.

So together, we created Gambler V: Playing for Keeps.

As the television synopsis said:

Kenny Rogers returns as Brady Hawkes, the Gambler, in this made-for-TV Western. Brady’s son Jeremiah (Kris Kamm) is now an adult, and seems to have followed his father’s footsteps into a life of adventure; however, Brady learns that Jeremiah has taken a far more dangerous path and has joined the gang of notorious outlaws Butch Cassidy (Scott Paulin) and the Sundance Kid (Brett Cullen). Fearing for his son’s safety, Brady sets out to find his son and rescue him before he winds up on the wrong side of a gun. The Gambler V: Playing for Keeps also stars Dixie Carter, Loni Anderson, and Mariska Hargitay.

The script was placed in the Hollywood Hall of Fame.

My writing had nothing to do with it.

The Gambler was the first continuing television series to have shows on the air in three straight decades.

Kenny Rogers was a true professional.

He began with a group of folk singers in the ‘60s: performing with the New Christy Minstrels and the First Edition.

He became a country singer, a pop singer, a singer of duets with Dolly Parton and Shenna Easton.

He turned to acting.

He became a cowboy.

He became The Gambler.

He got his wish.

My salute to Kenny Rogers.

May he rest in peace as he rests in our memories.

The song that began the Gambler series:

Ten Ways Authors Can Help Each Other