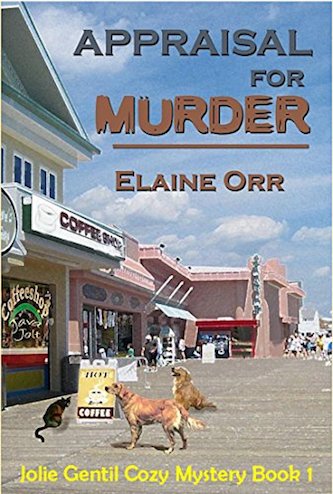 Jolie has a propensity for curiosity and digging for the truth, using methods that usually get her into trouble.

Can a real estate appraiser in a New Jersey beach town get in this much trouble? If your name translates to “pretty nice” in French, you’ve probably gotten used to teasing.

It doesn’t prepare you to find out that your soon-to-be-ex-husband has a gambling problem, raided your assets, and embezzled from his bank.

Jolie does not view this as a retreat, just a smart change.

She had no idea her life at the Jersey shore was about to get even more complicated… Finding a body your first day on a new job will do that.

Jolie Gentil’s life is a mess, and trouble keeps finding her even after she moves in with her aunt.

While this isn’t a fast-paced thriller, the characters are cute and the storyline seems to fit for a cozy read.

I wish the author had expanded more on the Scoobie character, since he seemed to be a little deeper than the rest, but maybe that’s for the next book. I also kept waiting for Jolie to decide she’d rather be a detective rather than an appraiser, but that didn’t happen either. It will be interesting to see what develops in later books.

The book includes a murder and a hit man for a loan shark, both of which involve Jolie and complicate her life more than it already is. The murder suspect is someone she went to school with and finds attractive.

There’s a bit of romance, some humor and some really likable characters in this book. I read it while sitting in the sun on my patio on Saturday and was just what I was looking for!

If you enjoy a lite, entertaining mystery, then you’ll this is the book for you.

By A Midwestern Gal

I have always enjoyed a good mystery, and in APPRAISAL FOR MURDER, Elaine has created a cast of characters and woven together a story line that I found both intriguing and entertaining.

The protagonist Jolie Gentil is in the middle of a divorce and returns to the small seaside town of Ocean Alley, where she spent her junior year of high school. I have always lived in a farming area in the Midwest, and since my mental picture of a seaside town was pretty much formed by the 1964 song, “Under the Boardwalk,”

I thoroughly enjoyed the colorful images that were painted in my mind by Elaine’s descriptions of Ocean Alley. In this beautiful setting that Jolie thought would be a serene place to heal, she finds herself not only being stalked by a predator trying to collect her soon-to-be-ex’s gambling debts but also caring enough about a former snobbish classmate to try and clear him of the suspicion that he killed his mother.

Jolie’s escapades kept me laughing. She was quiet and not especially popular in high school but has become a young woman with a propensity for curiosity and digging for the truth, using methods that usually get her into trouble, constantly letting her opinions be known, and somehow frequently getting into situations where she is injured. I thought it was commendable that Jolie has matured enough to try and get to know her former classmates on an adult level.

I also found myself particularly drawn to the character of Scoobie. Having lived with a recovering alcoholic for nine years now, I appreciate the author introducing a character that appears to be trying to get his life on track and showing hope that it can be done.

I look forward to reading the rest of the series and hopefully seeing that Scoobie is able to stay on course. Also, in Jolie’s ex-husband, Robby, we saw the dangers of a gambling addiction and where that can lead. Elaine succeeded in weaving both of these issues into the mystery in such a way that they enhanced the story rather than overshadowed it.

Aunt Madge is well liked in town, adding a personable and sensible character to the story, and the antics of Madge’s two dogs and Jolie’s cat are hilarious. The other characters, including several old high school acquaintances, each contribute their own special personalities to create a story that was enjoyable to read and hard to put down until the end.

Please click HERE to find Appraisal for Murder on Amazon.