Daily Review: The Clockmaker by Drew Neary and Ceri Williams 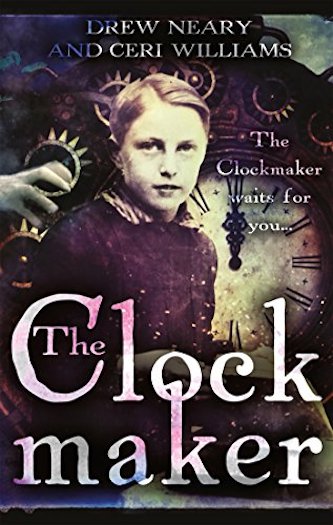 The Clockmaker waits for you.

A gripping supernatural novel set in post-blitz Scotland, the first of an upcoming series.

“No man in this world may boast of his might, he is awake in the morning and dead at night.”

Widowed in World War 2, Annette and her young son face a completely different life as they exchange the devastation of post-blitz London for the slow pace of a small village. The house they have inherited is old, its bones still settling, creaking noises in the dead of night and the murmur of scritch-scritch in the walls. Located outside the village of Lochnagar, it’s been empty for many years.

The unfolding of how the Clockmaker made his plans, his meticulous preparations and macabre creations, all builds up to a series of gruesome, horrific murders. These have just one end in view: his release from that which has held him captive for centuries.

A chilling supernatural novel with characters you’ll come to care for, The Clockmaker will interest anyone who fears the dark – and what might lie in the shadows…

OMG.! The ending of this book was really freaky. I wasn’t sure what I was going to get when the description stated sci-fy, paranormal, and it sounds like historical fiction.

This book was AMAZING!

The beginning has the story split between an old man that was captured by the Nazi’s and forced to create things and a widowed woman and her son. There were a couple of times that I had to go back and re-read because I wasn’t sure which story it was.

Then the story seemed to merge and was much easier to follow. The Sci-fi element is steampunk-ish creatures made from gears and bones and the paranormal aspect happens at the end (can’t say cause it will spoil it).

This book had me creeped out, and I can’t wait for the second one!

All the stars and a few full moons, too, for this amazing gothic thriller!

First, take a look at that gorgeous cover art! Rarely are we treated to such beautiful cover art. Of course, that is just the beginning. The real treat is inside the cover where there awaits an amazing cross-genre tale that will have you hooked from beginning to end.

The Clockmaker is the story of Annette and her son, Duncan, who are moving to an ancestral home in the highlands of Scotland. It is a tale set during the post-war era and has all of the atmospheric prose of that time period.

The house is old, full of creaks and sounds that lend to the overall aura of the book. Of course, the house comes with secrets, a some-what supernatural element and an old man that is full of surprises. As murders begin to happen, Annette starts to wonder how this man is tied in with the murders and the other strange events that the small family is experiencing.

This tale is fabulously written. There are times that it could have veered off into the “campy” side of horror or supernatural but it never once did that. Instead, it is captivating and will have you mesmerized until the very last page – and then you will want more because this is the first book in a trilogy!

While this story ends well, there obviously are questions that will be answered in subsequent books – and I cannot wait for those books to be written and printed!!

The Clockmaker offers something for everyone’s tastes: history, horror, supernatural, thrills and suspense. I highly recommend it for all.

Please click HERE to find The Clockmaker on Amazon.