Daily Review: Each Day I Wake by Seb Kirby 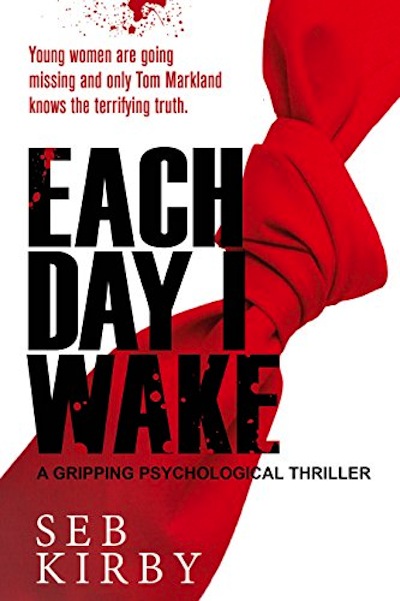 Each Day I Wake

By Glenda for GA Bixler Reviews

It was hard to imagine waking up and not knowing who you are.

I met Seb Kirby through reading Take No More which was an exciting thriller ride into the art world… But this latest book, with the psychological framework has moved him into an area in which he has excelled! Let me say right upfront–Wow! You’ve got to check this one out if you are into psychological thriller/suspense!

The book opens with the main male character in the hospital with almost total amnesia. I say “almost” because while he sleeps he remembers–he remembers beautiful women who are taken to a place which appears to be a library. The man and young girl have sex, but the man then strangles the young girl. Is this a scene from his own memory? He doesn’t believe he would commit adultery… but how can he have these memories?

It was hard to imagine waking up and not knowing who you are… The police sent an officer, but could tell him nothing–no witnesses had been found but they did find that he was full of narcotics… Did he know anything about that? But then to begin having dreams–dreams so real that it seems you are the person watching young women being murdered–would be absolutely terrifying!

It was his wife that had been looking for him, Janet Markland, who told him he’d been gone from home for 10 days. His name was Tom and the woman, who he didn’t recognize, told him she was looking forward to taking him home… Even coming home did not help, however. Tom didn’t remember anything, but his wife began to share about their life and tell him small things that might bring back memories, even their favorite song had not yet done it, however.

But he did have another dream. This time the girl’s name was Margot… and the script went as before, except this time, he could see something different. On the arm of the man was the tattoo of a red rose! Tom hurried to the mirror in the bathroom. No! He didn’t have any tatoos… Tom was not the man in his dreams!

With relief so real, he was now able to consider what he should do about what he was experiencing. His psychologist was not too helpful in this regard.

Thinking he was feeling better, he decided to go for a walk, without telling his wife…He knew where and what locations he passed, even though he didn’t recall when he saw them, but then a flash of memory and he was back in the water, afraid of dying… Fortunately a man stopped to check if he was alright and it broke his flashback sufficient to allow him to deal with it… But it made him just that more determined to find out what had happened! Who had caused him to be in the water around the Wharf?

Back home, watching television, he saw her–Cathy! It was a news item about the girl in the first dream–about Cathy who was missing from her home and her mother was making an appeal. He called his wife to watch and told her it was one of the girls he’d dreamed about, but his wife was hesitant to support his involvement, remembering that his psychologist believed they were false memories…

Tom had not been impressed with his psychologist and was not about to share anything further about his dreams… He was ready to act; he would talk to the police… But he knew that they would naturally suspect him…and that he would continue to work to discover who had tried to kill him…and see if and how it was connected to the murder of the young women in his dreams…

The added dimension of the main character not having his personal memories increases the suspense for readers since we are finding out only what is occurring within the limitation of Tom’s knowledge. The story captured my attention immediately and kept me enthralled until the final page. One interesting method by which the author brings clues is that Tom’s wife had kept a scrapbook of Tom’s news articles…By that he was able to learn much about his career and he then discovered he had moved into a new area–securities fraud–that he’d not been involved with in the past…

Another dream–this time he watches Rebecca die…and notices more about the hands of the murder–his fingers did not match Tom’s. Now he was positive he was not that man. And the only way to clear himself was to find the murderer…

I loved this one. Kirby’s rhythm of inserting dreams along with Tom’s finding out more about his past, claims full attention to determine who the criminal(s) might be… A captivating and compelling read!

Please click HERE to purchase Each Day I Wake.