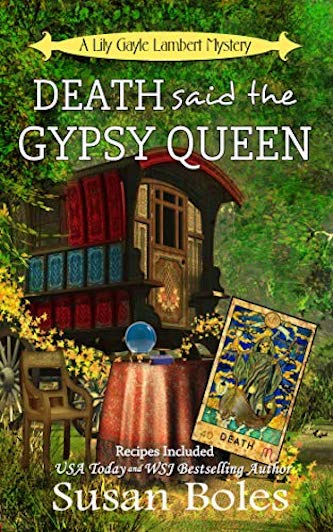 Discover a good southern cozy mystery as Lilly Gayle hurries to solve the murder before another dead body turns up.

“Beware the sign of the vampire blood,” said the fortune teller. “It brings madness and turmoil.”

Lily Gayle knows what that means, but, for the life of her, can’t figure out how the fortune teller does.

A quick road trip with Dixie. An unplanned stop at a roadside park. And, an hour later a dead body. Lily

Gayle, Dixie, and Miss Edna find themselves knee deep in another homicide investigation when the local vet assistant turns up dead behind an outbuilding at the farmers market.

Lily Gayle believes the words of the fortune teller will have a major impact on the investigation but can’t bring herself to tell the other ladies.

To reveal what she believes the words mean might bring trouble to another old friend. And would betray a trust. Only Ben knows and he, as usual, advises Lily Gayle to stay out of his investigation – which she isn’t about to do.

When the secret is revealed, the townspeople go mad and the fortune tellers words come true. Can Lily Gayle, Dixie and Miss Edna solve the murder before more people are harmed?

Lily Gayle has finally decided it was time to move on with her life and maybe pursue her attractions to Vlad. But news of Vlad’s research project has leaked and the whole town is in an uproar.

When an old original town settler is murdered with undertones of vampire rituals, people suddenly revert to dark ages mentality and accuse Vlad of unleashing this terrible madness upon their town.

And do the words of the gypsy fortune teller have any bearing on what has happened. Can Lily Gayle, her sidekick, Dixie, and the nosey, bossy, Miss Edna figure out who the killer is before the whole town erupts into a crazed mob?

You’ll want to read this story to find out.

Eight years after her husband’s death, Lily Gayle has bravely finally decided to face her fear of driving. When she and her best friend Dixie retrieve her car out of storage and head back to Mercy, Mississippi, Lily Gayle’s nerves get the best of her and she needs to pull over at the rest stop to compose herself.

But this is no quiet rest stop. A gypsy wagon is parked there and the gypsy woman wants to read Lily Gayle’s fortune.

Braving having her fortune read and ignoring her best friend Dixie, who thinks it’s foolishness, Lily Gayle listens as the gypsy tells her to “beware the vampire blood.” But what can this mean?

With Lily Gayle, there is no such thing as a simple stop or a simple shopping trip. Dead bodies just seem to find her, or rather it’s her who finds them. Soon after, you just know that Lily Gayle, her best friend Dixie and spunky Miss Edna, will be investigating the murder, along with Lilly Gayle’s cousin Sheriff Ben.

If you like a good southern cozy mystery with interesting characters, you’ll enjoy riding along with Lily Gayle on her adventures as she hurries to solve the murder before another dead body turns up.

I enjoyed book four in the Lily Gayle Lambert Mystery series and am looking forward to the next one!