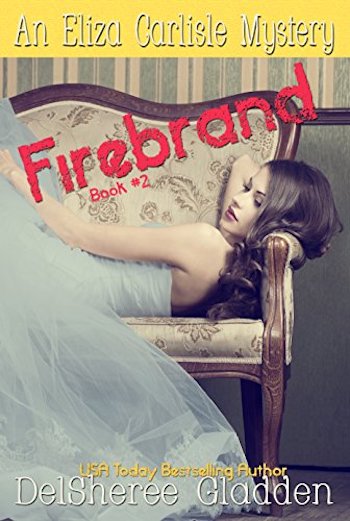 Besides Eliza’s love life to worry about, there is a murder and a kidnapping.

What’s worse than getting dragged into a murder investigation because you tried to help a friend?

Answer: Getting dragged into a murder investigation, drug ring, and criminal syndicate because someone mistakes you for a friend of your most despised coworker.

When Eliza sees the man dead on the floor of Saul’s Diner, she’s more annoyed than scared. Until they all realize the man’s death wasn’t caused by a heart attack and Queen Bee Danielle blames Eliza’s cooking. Fit to be tied, Eliza is determined to let Officer Gordon figure out who really killed the guy and put her energy toward not getting kicked out of culinary school after a reporter prints Danielle’s spiteful accusations.

But Eliza is Eliza, and staying out of things never works out quite the way she expects. When she is somehow mistaken for a friend of Danielle’s by the people who actually killed the guy in the diner, she quickly finds herself up to her eyeballs in creepy fish, a burgeoning drug ring, scary criminals who like to put black bags over people heads before they kidnap them, and baking a three tier birthday cake at the last minute for someone she doesn’t dare refuse.

Eliza has never hated Danielle more, but helping her is the only way to save herself. After that, Danielle is fair game.

Already the third book about Eliza (yes, I am counting the Kindle World book The Catalyst. At work Eliza is confronted with a murder and when she is implicated by the media she decides to go sleuthing again. And police detective Gordo is not happy about that.

I got tired myself while reading Eliza’s crazy schedule. Up in the early mornings and doing things (culinary school, work, sleuthing) until deep in the night. Fortunately she is young!

There is a bit of a shocker regarding Baxter that hit me out of nowhere. And Eliza has a new boyfriend (Puck from the first book), who is a great guy but … well … #teamBaxter all the way here!

On a side note: love the cover and the dress in it is described in the book which I loved.

I can’t wait for the next mystery and will keep my fingers crossed for some Baxter/Eliza, cause I NEED that.

Poor Eliza, that girl will never steer away from trouble or murder or sexy Baxter. She has this neighbor, Baxter, with a past that is starting to reveal itself and deep inside his lawyer brain he has deep feelings for Eliza.

Well I like to think Eliza has the same feelings for him but she’s got this fun boy toy, Puck, because he’s nothing at all like Baxter. So, besides Eliza’s love life there is a murder. Somehow she is involved indirectly and her friends are trying to figure it out.

Eliza’s story is separate from Trouble Magnet but the main characters are the same and it would be helpful for the backstory to read it in order. There is a soft cliffhanger involving personal relationships and the unresolved issue of her sibling, Simon.

I really enjoyed the humor from Eliza and the crazy rules of the apartment complex and the over protectiveness from Baxter. It’s a fun series with lots more to come.