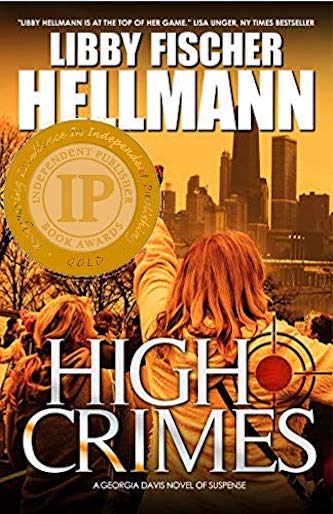 No matter which side of the political aisle you sit on, if you enjoy reading a no-holds-barred, high octane mystery/thriller, you will love High Crimes.

How do you solve a murder when there are 42,000 suspects?

That’s the task facing Chicago PI Georgia Davis, hired to hunt down those behind the assassination of Resistance leader Dena Baldwin at a demonstration fourteen months after the 2016 election.

The gunman, on a nearby hotel rooftop, dies within minutes of the shooting.

As Georgia sifts through Dena’s 42,000 Facebook followers, she discovers that unknown enemies hiding behind fake profiles have infiltrated the group.

She finds others who will do whatever it takes—including murder—to shield right-wing, wealthy elites.

Threats and bruises have never frightened Georgia, but she’s side-swiped by the sudden reappearance of her mother, who abandoned her when she was a child.

Can she survive a family crisis at the same time she pursues killers whose only goal is to protect themselves?

The only real-life public figure to go unnamed is the “most unpopular president ever.”

Dena Baldwin, the daughter of a powerful and corrupt Washington, D.C., lobbyist, is the founder and charismatic leader of ResistanceUSA. She has organized a massive protest rally in Chicago’s Grant Park.

As she takes the stage to deliver the opening remarks, she’s shot dead, and the assassin subsequently dies in an explosion.

The FBI puts it down to domestic terrorism and determines that the shooter acted alone.

Dena’s mother isn’t satisfied with this assessment and asks Georgia to find out the truth behind her daughter’s death.

A shrewd investigator, Georgia surrounds herself with top-notch computer techs and police and FBI contacts.

The plot unfolds logically, and for readers who watch the nightly news with dismay, the novel offers a satisfying alternate reality.

How do you solve a Murder with 42,000 suspects? This immediately caught my attention and made me want to take a closer look. I’m so glad that I did.

I’m a long-time fan of Ms. Hellmann’s work, and Georgia Davis has proven to be one of my favorite characters. This latest addition to the series did not disappoint. While this one is more political in nature, it’s not overtly so, and only seems to enhance the tension in the story.

No matter which side of the political aisle you sit on, if you enjoy reading a no-holds-barred, high octane mystery/thriller, you will love HIGH Crimes. I highly recommend it!

As Dena started to address a huge crowd at a rally in Chicago’s Grant Park, a sniper from a nearby roof shot her dead. One of her staffers was also killed, and several people were injured. Police quickly found the shooter, an ex-Army marksman. An IED had apparently gone off prematurely and killed him instantly.

Dena’s mother Erica thought there was more to the story. She asks private investigator Georgia Davis to find out if Jarvis was the lone killer or a patsy of someone more powerful.

Georgia is reluctant: the FBI had already pulled out all the stops, following all the physical and digital leads, with minimal success. Georgia’s mentor, Paul Kelly, had highly recommended her, and she was finally convinced to take the case. Erica, married to Washington mover and shaker Carl Baldwin, had deep pockets, allowing Georgia to call in the big guns.

Some readers may find this Georgia Davis novel too political for their tastes, and that is understandable. For those of us who share the opinion that the current conditions in the government are disturbing, and for those who can overlook the politics and just enjoy a tale well-told, this book will not disappoint.