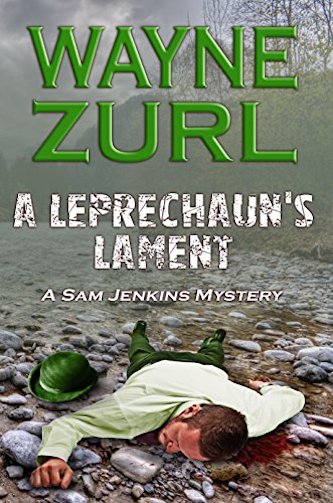 A mystery that begins as a simple story that builds into one of intrigue with international ramifications.

A stipulation of the Patriot Act gives Chief Sam Jenkins an easy job; investigate all the civilians working for the Prospect Police Department. But what looks like a routine chore to the gritty ex-New York detective, turns into a nightmare. Preliminary inquiries reveal that a middle-aged employee didn’t exist prior to 1975.

Murray McGuire spent the second half of his life repairing office equipment for the small city of Prospect, Tennessee, but the police can’t find a trace of the first half.

After uncovering nothing but dead ends during the background investigation and with frustrations running at flood level, Jenkins finds his subject lying face down in a Smoky Mountain creek bed—murdered assassination-style.

By calling in favors from old friends and new acquaintances, the chief uses resources developed during a lifetime in law enforcement to learn the true story of the man everyone called Typewriter Murray.

SAM JENKINS MYSTERIES are stand-alone novels that can be read in any order.

This book is a fun read as well as a great who-done-it!

Murray McGuire is a man who has worked for the city of Prospect, Tn. for many years. Chief Sam Jenkins gets a grant from Homeland Security for background checks on all civil employees as well as new hires. When it comes to Murray, there’s no record of him before 1975! When Sam asks him for his birth certificate, marriage certificate, etc., he tells Sam that he lost all his important documents. Then Sam finds out Murray lied about it.

As information is slow going – Sam calls various government agencies: FBI, CIA, Northern Ireland and the British Consulate to see if anyone knows anything about Murray. When it’s all said and done, Sam uncovers a web of deceit and revenge.

While all this is going on, Sam sees his friend Lonnie Crosby – Sam isn’t too thrilled to see him – they haven’t spoken in many years. Will Sam confront Lonnie?

Slowly but surely, the pieces begin to fall into place and end in a surprising way!

Wayne has weaved a story that is full of suspense and comedy. You think you know who the killer is (I’m not telling) but it’s the last person you would expect!

One thing you don’t see too much is a comedic mystery and this is one of them! Wayne’s characters are real people – Sam, Kate, Bettye, and Stan are people you care about. I love Wayne’s sense of humor – even his characters are funny and make you laugh….that’s what I did!!

This begins as a simple story that builds into one of intrigue with international ramifications. It shows to me that you don’t need all the frantic car chasing, gun blasting actions of the all-American cop shows as depicted on TV Screens everywhere, to build tension.

This is the quiet sleepy town of Prospect, Tennessee, where nothing much ever happens and the 13 strong police department handle the routine everyday incidents, finding time to introduce vetting of its staff for the first time. That’s when it gets frustrating and one of their regular maintenance long-standing employees they discover doesn’t really exist.

When the second murder in the space of a few weeks happen and it turns out to be their very own non-registered, non-existent maintenance man Chief Sam Jenkins lends his past experience to bear and calls in a few favours, when he comes up with nothing from his routine inquiries.

I was reminded of Stephen King’s lesser-known ‘From a Buick 8’ and ’11:22:63’ whilst reading this, not for the stories but the style of writing, the inner voice of the author, and the quality of information contained in a well-researched book. His easy style and humour in the dialect conversations brought the characters to life for me.

Am I on my own in wanting to know how the other half eats? It always amazes me how cop shows and books portray characters as not needing food and watering, to me it makes it more real (but really grits and gravy for breakfast?) Here we have all the quality and realism of an alternative type of policing where everyday relationships are brought to life by excellent writing and attention to detail.

I am like a ‘train spotter’ spying a classic steam train – examining other types of policing than that which I am familiar – this is drenched in detail and quality characterisation.

I am left with wanting more of this author.

Please click HERE to find A Leprechaun’s Lament on Amazon.