Daily Review: Love on the Rocks by Debbie De Louise 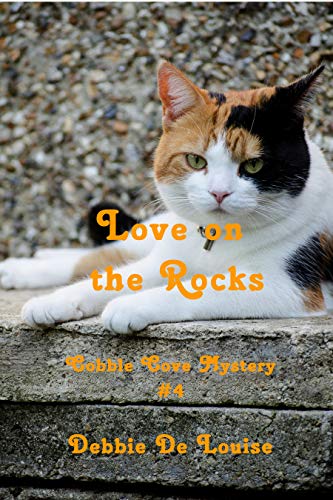 Romance and mystery are entangled with a box of chocolates in the delightful Cobble Cove.

It’s February in the small town of Cobble Cove. Love is in the air . . . but so is murder!

When Alicia helps plan a Valentine’s Day Party at the Cobble Cove library that also includes a surprise for her newlywed friend, Gilly, things go wrong when a mysterious box of chocolates addressed to the director turns out laced with poison.

Clues Lead to A Dead Suspect.

Although Alicia promised John she’ll no longer meddle in crime investigations, she and Gilly set out to find the person threatening Sheila who murdered the courier of the deadly candy. The three people they suspect include the professor from California who’s been romancing Sheila while she assists him with research for his book; the obnoxious patron Rhonda Kleisman who threw coffee at the director after refusing to pay for a damaged book; and a visiting widow staying at Gilly’s Inn who’s unnaturally curious about Sheila and earns the nickname of Madame Defarge for her interest in knitting.

While Alicia and Gilly are trying to solve this new Cobble Cove mystery, Sneaky is introduced to Gilly’s new kitten, Kittykai, a calico she brought home from her honeymoon in Hawaii. It’s not like at first sight, but the two cats eventually become friends. They also both play a part in foiling the killer’s murder attempts, but will Alicia and Sheila survive unscathed? 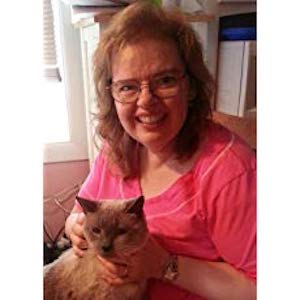 I love cat books and this one has two…but even better, one if a calico kitten! A friend for Sneaky! Always glad to see a new book out by Debbie de Louise, it gives me a chance to visit with Sneaky once more.

This story is a complicated plot just chokker-block full of red herrings. Over and over I was sure I knew who the villain was only to be left wondering all over again. It was nearly over before I figured it out.

A likable and lively cast of characters and I really appreciated the nice touch of the box of chocolates! Reminded me of Agatha Christie.

The story seems like a simple tale of friendly people in a small town until you realize you are caught up in a web that stretches away from the center and off into the past.

By Mallory A. Haws

LOVE ON THE ROCKS is Book 4 in the delightful Cobble Cove Mystery series. I love any cozy set in libraries or bookstores (any fiction period in those settings) and any animal cozies, so I loved this novel; plus it was so well-written I just couldn’t turn away!

Real-life issues occur, such as weddings, elopements, congratulatory parties; and even a nasty Library patron who spills food on books and then doesn’t wish to pay the fine, even becoming aggressive to the point of assault.

Then the Library Director is poisoned, obviously intentionally, at a gathering; and Alicia and Gilly can’t avoid being drawn into the amateur sleuthing in order to protect their friends and their respective families.

The danger comes really close to “home” as well.

Please click HERE to find Love on the Rocks on Amazon.