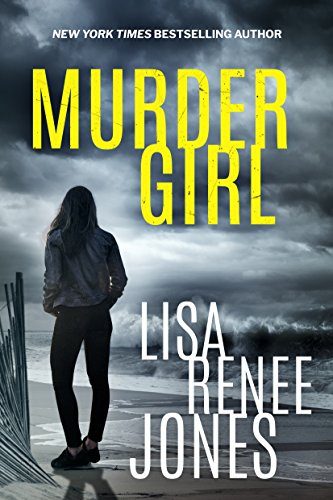 Murder Girl is a mystery thriller that takes the reader on one helluva sexy, suspenseful ride!

It’s Lilah Love’s job to inhabit a killer’s mind. The unapologetically tough FBI profiler is very comfortable there. But her latest case is making her head spin. It’s a string of brutal assassinations carried out across the country, each tied to a mysterious tattoo. Body by body, she’s followed the clues all the way back to her hometown. And every step of the way, the killer has been following her.

Here, beneath the glamour of the privileged Hamptons community, is a secret long buried but never forgotten. It’s bigger than Lilah. It’s powerful enough to escape the reach of the FBI. And it’s more personal than anyone can imagine. Because it’s hiding in Lilah’s own past. To fight it, she’s forced to turn to her lethally tempting ex, Kane Mendez. He’s an expert at bringing out Lilah’s darkest impulses. If she plans to survive, she’s going to need them.

n this second installment to her Lilah Love Series, author Lisa Renee Jones has (once again) succeeded in spinning an intricate web of suspense and intrigue that I found myself helplessly caught up in. Unlike the first book in this series–which set a slower pace, enveloping me gradually–“Murder Girl” captured me right from the very start and held me hostage right up until the very end.

And let’s not forget about the intense and searing chemistry between this tough, abrasive FBI profiler and her temptingly dangerous ex-boyfriend, Kane Mendez. Simply… Off. The. Charts!

Picking up right from where the last book left us hanging, Lilah continues on her quest for answers to questions that just keep on mounting. Despite her personal entanglement in a case that incessantly pulls her in deeper, no one—not her family and especially not Kane—will stand in Lilah’s way.

With a gripping storyline packed with numerous twists & turns and an array of characters that warrant a suspicious eye, Murder Girl takes the reader on one helluva sexy, suspenseful ride!

But the ride isn’t over folks… Nope! Not by a long shot. So buckle up and hold on tight. Because as good as Murder Girl is, the next book promises to be even better!!

This is the second book in the Lilah Love series, a continuation of, and resolution to, the intriguing suspenseful events that unfolded in the first book.

The case in the Hamptons becomes more complicated with each passing day and FBI Agent Lilah Love, a woman with a serious dark side she has yet to fully accept, has to unravel enigmas which strain her comfort level as they hit too close to home, in more ways than one.

Lilah has much to contend with on a case of connected murders across the country that have lead back to her hometown. Her father’s political ambitions have driven him down a possibly dangerous and corrupt path causing Lilah to postulate compromising questions as she rethinks her own past.

Local law enforcement wants their murder case closed having set their sights on the wrong perpetrator, not having bought the profile of an assassin ticking victims off of a hit list. A stalker continues to leave taunting notes implying knowledge of the secret Lilah shares with the son of a man who ran a drug cartel, said man being her ex-lover from two years ago.

With the presence of her other ex-lover, another FBI agent, a good man she’s unable to love, there’s animosity between the two men. Among all this Lilah needs to confirm her assassin theory so the FBI can take jurisdiction and find the true killer as the deaths mount up. The only person Lilah trusts is the man who walks between two worlds, the man who gets her, who understands the darker side of her psyche and that she loves but the badge is always between them.

This book had an awesome intricate plot, it was fast-paced action and suspense; there were insidious enigmas with confounding twists/turns to keep the reader engaged. The heroine was a complex, feisty, fascinating individual. This story has a blend of everything that meshed beautifully: murders, betrayals, conspiracies, dirty law enforcement, assassins, patriarchs of drug cartels, and a powerful elitist society manipulating the strings. I thoroughly enjoyed this read. This is the end of the duet but not the end of the series, some things were left for future resolution