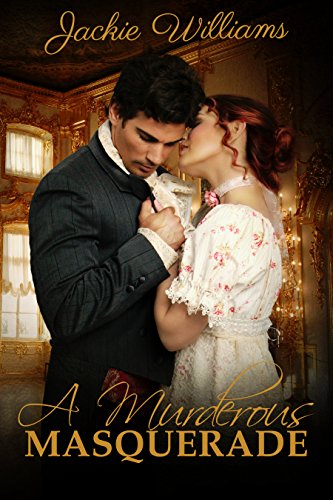 Full of drama, mystery, intrigue, as well as love, this is one of those books that I could easily read again and again.

Waiting for nearly two years hadn’t been easy. Every second under Anne’s emerald gaze had been pure torture while Giles waited out her mourning, but now it was over and with the county’s eligible, if aging bachelors already gathering at her gates, he hadn’t a moment to lose.

With his heart in his mouth and his marriage proposal on his lips, it was unfortunate that Anne’s aristocratic father and overbearing brother chose that particular moment to visit.

Lord Edward Ellesworth had never been keen on the lower classes. That his sister would even consider marrying someone as inferior as Giles Denvers, was beyond all reason. It wasn’t going to happen while he had breath in his body. There had to be a way to separate them.

With Giles facing the hangman’s noose, and Anne frantic to avoid marriage to one of her father’s aging cronies, desperate measures are called for.

Add to the delicious mix of romance and intrigue, a herd of hungry prize porkers, a beautiful young cousin, a very noble intention plus a diamond as big as a walnut and we have the makings of a ripping Regency yarn!

This book is a stand-alone story but the series is best read in order to gain full enjoyment of all the previous characters and scenery involved. (Please see Silence of Scandal by Jackie Williams)

I stayed up into the wee hours because I just couldn’t put this story to bed before I’d finished it. Ms. Williams novel is, as to be expected from such a wonderful wordsmith, on top fop form with her Masked Ball leading to the exciting events unfolding within the walls of an ancient, noble castle riddled with secret rooms and passages.

Giles is at the start of his new life and his soon to be wife, Lady Anne, is flushed with beauty at her newly acknowledged lover’s declaration but her family opposes this love match with the full might of the English aristocracy. A champion steps in – Alexander Duke of Ormand – and the derring-do begins. Accused of a heinous crime, the new Lord Caithwell is to be hung at dawn and what will become of Lady Anne – (I was reading this at about 1.45am and had to carry on!).

Stunned by the twists and turns combined with raucous humor and such sensitivity I was overwhelmed, some passages had me welling up, so keep the hankies at the ready. Our introduction to a future heroine, I hope, had me in stitches – Charlotte – Giles Danvers ward makes a striking entry on the stage of this new series (I most certainly hope you are listening out there Ms. Williams and are poised and ready to write the next installment for my delectation?!) and plays a bold role in the tale.

A fantastic story in its own right and an excellent sequel to Silence of Scandal. I totally recommend this as an outstanding read…

At last Giles Denvers is going the marry the woman of his dreams. He had fallen in love with Anne from the moment he had first set eyes on her, but she was in mourning, and he had to allow for the proper time to pass before he proposed.

But there was no way that Anne’s brother, Lord Edward Ellesworth, is going to allow a marriage between his sister and a nobody like Giles. And he will do anything to see that the marriage does not take place.

Giles finds himself staring at a hangman’s noose for a crime he did not commit. His dreams of a life with Anne are dashed to the ground, and he fears for her future and that of his cousin. Both women depend on him to secure their safety, but what can he do while he is behind bars?

While Giles best friend, Alexander, Duke of Ormond, tries desperately to clear Giles name, Giles must come to terms with his own mortality as he tries to do everything possible to secure the future of the woman he loves.

Oh, my giddy aunt! I loved Silence Of Scandal (Unrivalled Regency #1) by Jackie Williams, but A Murderous Masquerade (Unrivalled Regency #2) was simply brilliant. I was completely drawn into the story from page one, and I couldn’t turn those pages fast enough. Full of drama, mystery, intrigue, as well as love, this is one of those books that I could easily read again and again.

I loved the characterization of Giles. He was a really lovable hero. His compassion for the women in his life, his fear of them, was very touching. Likewise, Anne is a very gentle soul who learns to stand up for herself. But I have to admit my favorite character was Giles cousin, Charlotte. Charlotte has such a brilliant mind and is so full of spirit that I could not help but like her. I think the next book in the series is about Charlotte and I cannot wait to read it!

A Murderous Masquerade (Unrivalled Regency #2) is a great read. I cannot recommend this book enough. If you like great historical romance with a super-fast plot and believable characters, then this is the book for you.

Please click HERE to find A Murderous Masquerade on Amazon.