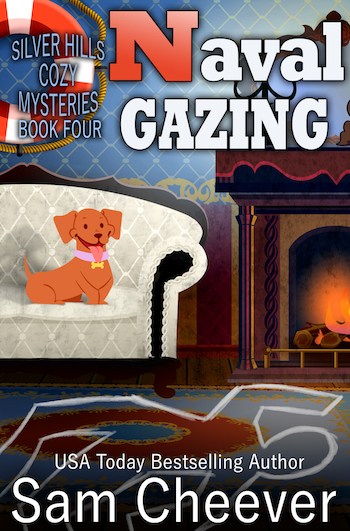 Come to Silver Hills. Where age is relative and relatives can be deadly.

When their new friend, Scarlett, moves to Silver Hills, Flo and Agnes soon realize the crotchety veteran isn’t exactly a people person. Unfortunately, her acerbic personality isn’t helping her convince Detective Peters that she had nothing to do with murdering the dead guy beneath her floorboards.

So the two sleuths, with a colorful array of the usual sidekicks, dive into the decades old murder and quickly learn it has a grip in the present. Can Flo and Agnes keep themselves above the fray? Or will they soon find themselves over their heads and swimming against the tide? If you’ve been to Silver Hills before you already know the answer to that.

There’s really only one question left: backstroke or breaststroke?

She has done it again creating a hilarious, captivating, and intriguing mystery. The whole Silver Hills Crew including Flo and Agnus welcome a new member… Scarlet.

Read along as detective Peyerssuffers one headache after another tring to keep up with the silver hills resident as all of then including himself try to solve a murder.

Absolutely worth the read, i didn’t want to put it down.

Ms Cheever has done it again! Her flair for writing hilarious mysteries involving Flo, Agnes and the rest of the gang at The Silver Hills Senior and Singles Residence is 1st rate. The cast of characters are so down to earth and crazy that they will remind you of that relative that we all have that is “a little out there” and always getting into mischief.

In Naval Gazing we have a new resident, Scarlett, who becomes another fantastic addition to our team of investigating misfits who once again give poor Detective Peters a run for his money (not to mention an extreme headache).

When Scarlett’s daughter finds skeleton bones under the floorboards of her mom’s house, the girl’s can’t help but get involved and try to clear Scarlett of any wrongdoings. Thus the hilarity begins.

Two Thumbs Up for another awesome addition to the series. A book that is packed full of fun and laughs that will keep you turning the pages and grinning from ear to ear.

This is a great example of the cosy mystery genre, it has all the correct ingredients, murder, lots of suspects, older people growing old disgracefully and a big chunk of humour.

I especially liked the characters of Flo and Agnes who are so well written that you almost feel that you know them, Detective Peters is also very believable. The best aspect of this book for me however is the humour, there are so many laugh out loud passages that it’s almost impossible to remember them all.

But don’t read this in a public place or your laughter will attract some very funny looks!