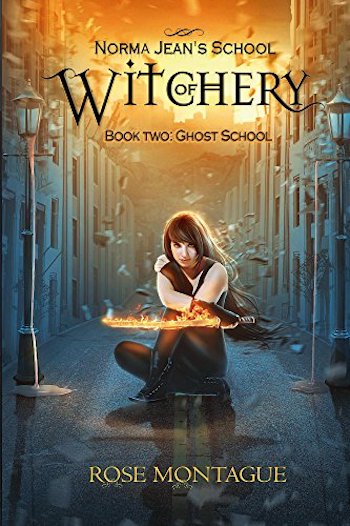 A dangerous and powerful magical device is stolen and Jewel is recruited by a shadowy government agency made up of witches with special abilities to recover the device. Jewel soon finds herself matched against a power even greater than hers and must rely on her friends from Norma Jean’s School of Witchery for help.

When Jewel finds herself pitted against an army of Zombies, things really heat up.

It doesn’t help that someone has put a bounty on her head. Secrets are revealed, romance takes an unexpected turn, and a new world of adventure is opened up.

Ghost School is full of action and surprises and the magic and mayhem continue to grow in this exciting sequel. 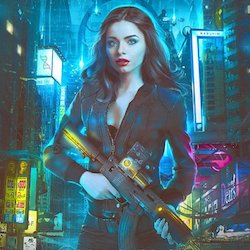 By Truth in Fantasy

I literally cannot think of a single thing Rose Montague has left out of this grand adventure. I couldn’t stop turning the pages—because I kept waiting for a break in the action, so I could put the book down and maybe get on with my life.

But no—I didn’t want to miss a thing—even though I knew all of that action-packed goodness would be there when I came back to read. Rose Montague has continued her epic paranormal saga with cool characters who do magical things in interesting settings.

I love Jewel—our extraordinary heroine—and can’t wait to read more of her story—and I suspect that the third book in the J’ Amigos trilogy, Jill, will also involve Jewel—who is off to Faerie on a quest.

When I read I look to be transported into the story. It has to take me to that place within that sparks my imagination and creates a moving picture in my head that rolls as I read. Rose Montague’s second book in the Norma Jean’s School of Witchery Series, Ghost School, succeeded in transporting me to that place. It is hard not to be giddy when a writer can combine, vampires, fae, witches, and other “unnatural beings in one book and have me wanting more…wait did I mention the zombies? Yeah, there are zombies!

Picking back up with Jewel and her band of misfit friends a lot changes very quickly. Jewel is sought for recruitment in a secret government agency that utilizes witches and other “unnatural” beings to keep the world safe. An agency that, if they knew her secret, the source of her real power, would just as soon lock her up and throw away the key.

Jewel’s faith and trust in her friends and her connection to her boyfriend create a Jewel that, while still coming into her own, is cautious, yet confident. Her own inner strength and snarky wit refuse to be recruited unless they send her an agent that will tell and show her the truth, both good and bad, about aligning one’s self with such a group…enter Ghost.

Of, course it is not just Jewel’s track record for dealing with those intent on doing wrong that has the agency interested, it is how she magically dealt with the threats posed that has raised a few eyebrows. So when a powerful magical device that can amplify magic, exponentially, is stolen her skills are enlisted to help Ghost find and destroy it before it can do harm.

What the agency does not know is that Jewel has secrets about powers that she fears may land her locked away, like new skills picked up from receiving blood from a vampire family member, the control she is gaining over her ability to see the future, and her still developing control over her unique and feared type of magic.

Fighting a madman that can wake the dead, creating zombie armies to unleash upon the world, will unearth the full nature of her own power for all to witness, and when her secret is out and the madman is not the only one after her she will continue to fight and possibly forfeit her own life. Typical of Jewel she places her faith and trust in her friends to fight alongside her while the connection to the boy she loves is tested by another who could follow her to where her destiny truly lies.

Like book 1 in the Norma Jean’s School of Witchery Series – Jewel, book 2 is full of action, adventure, sarcasm, love, friendship, strength, and magical beings of every sort. What’s even more exciting is Jewel’s true destiny and who will be standing beside her when there are no more secrets or need to hide.

Montague did it again, with a strong female character that young women should be proud to have etched onto the pages of a book. Well written, great characters, and storytelling at its best!