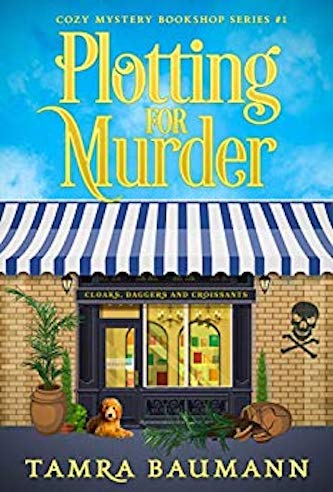 Equal parts romance and cozy mystery, Plotting for  Murder is a delicious ride through the world of food, books, and murder.

Sawyer Davis’ new life in picturesque Sunset Cove is crumbling around her as fast as the old Victorian house she lives in.

She’s a chef whose matchmaking mother has left her a puppy, a bevy of single men to choose from, and a bookshop dedicated to whodunnits.

Complete with a book club of amateur sleuths who live for death.

When one of the members dies just after eating Sawyer’s amazing truffle mac and cheese, Sawyer is immersed in an even bigger soup pot of trouble.

With her chef’s reputation on the line, and an uncle after her inheritance, Sawyer teams up with the sheriff who once broke her heart—whether he wants her help or not—to solve the mystery.

Will past hurts, and a long-buried attraction for the sheriff stand in the way of solving the crime before the murderer strikes again?

Plotting For Murder is the first in a new cozy mystery series by Tamra Baumann. Sawyer Davis has left her job as a chef in Chicago to return to her West Coast home town, Sunset Cove, to take over the Mystery Bookshop her late mother has left her.

All goes reasonably well until a member of the shop’s mystery book club drops dead during a meeting—after eating Sawyer’s food, at that. As if that wasn’t enough, the man who left Sawyer at the altar years ago is now the town sheriff.

Add the usual assortment of eccentric characters, some of them definitely on the suspect list, a visit from Sawyer’s traveling magician father, and the mystery of what else Sawyer’s mother may have left her, hidden from her greedy uncle, and you have a charming addition to the cozy mystery shelf.

This was a great mystery, awesome characters and one of the cutest dogs I’ve read about in a while. I’ll say upfront that I wasn’t a fan of the present tense style and can’t quite figure out why it was used unless it was supposed to be like Sawyer looking back and writing her memoirs.

But even then, it’s kind of annoying, but I’m glad I didn’t let it stop me from enjoying a great story. The riddle, clues and puzzle aspect really kept me intrigued.

Other than the constant present tense, it was well-written as far as vocabulary, and the dialogue was actually believable–and real-sounding. The author did a great job of painting the nasty uncle as a total snake because I absolutely couldn’t stand him–am I awful to wish he’d been offed?

But then they’d have thought Sawyer did it lol. At first, I wasn’t sure about Brittany, the store employee, but she grew on me more and more. I just love what good thing happened for her eventually! I liked the romance aspect a lot. It was just the right amount.

At first, I was one team, but by the end of the book, I was ready to switch teams. I won’t say, so I don’t spoil it 😉 The other supporting character of Madge was a lot of fun! I got such a kick out of how she and Sawyer would compare case notes, but Dylan the sheriff knew what they were doing all along. Renee, Sawyer’s best friend was a hoot!

She was a happy-go-lucky free spirit and dated a new guy almost every week. Cooper the mini Doodle was such a sweet ball of fur for Sawyer to cuddle and love now that her mom had passed. I thought it was sweet for her to arrange for Sawyer to have that pup before she died.

Her mom was a much more clever lady than most people thought.

I can’t leave out the sweet Admiral! Every mystery needs a fun and quirky character. The author nailed it with the Admiral. I hope he’s around for a very long time! As far as the killer, I was going back and forth on that one, so it was a little bit of a surprise.

But it led to an awesome showdown where little Cooper the mini Goldendoodle got to be a hero, and his mommy wasn’t too shabby either! The sheriff showed up just as my nerves were giving out lol. I thought the ending was satisfying as far as the main mystery, but it was kind of fun to leave a couple of little threads dangling.

I’m definitely enticed to read the next book!

Please click HERE to find Plotting for Murder on Amazon. 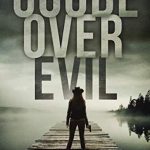