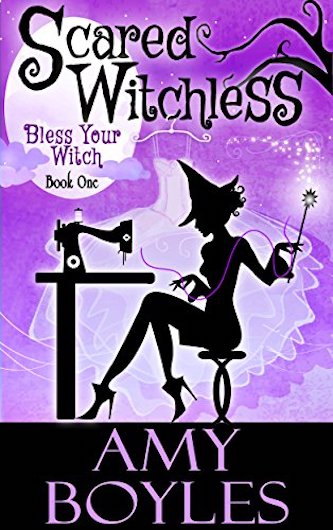 This cozy mystery has it all – magic, mystery, family secrets, humor, and romance.

A witch. A murder. A wedding dress?

Dylan Apel is having one heck of a summer. She knows her hand-made clothing is special but magical? Discovering that she’s a witch is bad enough, but when Dylan realizes there are folks who’ll kill to possess her witchy powers— that’s enough to make a girl want to hide out in the back of her boutique. The only problem is, Queen Witch is in town, itchin’ to make sure Dylan learns to cast spells, and this witch won’t take no for an answer.

Dylan must learn fast—someone just killed her best client with a poisoned gown meant for Dylan. Was it the tall, mysterious hottie in black, who’s suddenly everywhere she goes? After all, the first thing Roman Bane says is he doesn’t like witches. Is he here to save her, or kill her?

Dylan is barely getting a handle on her new powers when she finds herself surrounded by witches bossing her this way and that, local police nosing about, and wary clients—death by clothing is not good for business. And the solstice is coming … a time when witch powers are at their peak. Can Dylan survive the chaos long enough to figure out her new life?

Dylan, Sera, and Reid are three sisters who live with their grandmother and her caregiver in a small town. Dylan is a seamstress with a shop and a gift for making clothes that fit to perfection and make her patrons look and feel great.

Sera has a pastry shop and makes mind alteringly good baked goods. Reid has not yet found her gift. Their grandmother has been in a mute state (sounds more like catatonic to me) for the last three years.
The girls’ lives change when their shops get favorable write ups in the paper.

Dylan is visited by the Queen Witch and told that she and her sister are witches and that other witches would try to kill them for their power. She tries to teach them a crash course in spell work and provides them with a hunky bodyguard.

There are plenty of twists to this story as they try to find out who is trying to kill them and why their grandmother didn’t want them to know that they were witches. I enjoyed this story immensely. The characters were interesting.

I will be looking for growth in the characters as the series progresses. I would recommend this book for people who enjoy cozy mysteries with witches as protagonists.

I’m so glad I stumbled across this book on social media! I instantly fell in love with the cute cover art and title, and the content of the book was just as much fun. Heroine Dylan Apel is a boutique owner/clothing designer in a small Alabama town.

She has a special gift with needle and thread that makes her customers feel transformed when they put on her clothes. What she doesn’t know is that her gift is a magical one (ditto for her sister who creates bliss-inducing desserts at the bakery next door).

Dylan only learns the truth when her most obnoxious client is incinerated by a dress that Dylan had planned to wear herself. Seems a malevolent witch wants Dylan’s powers and will stop at nothing to get them.

So, Dylan has to learn how to harness her magic, figure out the intricacies of witchy politics, and stay safe until the Summer Solstice. Fortunately, she has her sisters, her kooky, just-revived-from-a-catatonic-state grandmother, the South’s Queen Witch, and a sexy bodyguard to help her solve the mystery of who wants to hurt her.

This book has it all – magic, mystery, family secrets, humor, and romance, and it was a fast-paced, entertaining read from beginning to end! I appreciated that there were several twists and turns in the plot that I did not see coming. (I spent most of the book being sure I know who the evil, power-stealing witch was only to end up being dead wrong!)

I’ve read quite a few books involving characters with supernatural powers, plus I’ve watched many TV shows in that genre (including all 8 seasons of Charmed which was about a trio of witchy sisters), so I didn’t expect this book to feel as clever and fresh as it did. Kudos to Ms. Boyles for reinventing the wheel and doing some really imaginative world-building in this book. I particularly liked the idea of there being Witch Police and how strict (and scary!) they were.

As much as I enjoyed all of the female characters in the book, I ended up being most fascinated by Roman Bane, the enigmatic bodyguard Dylan finds herself crushing on despite knowing what a bad idea it is. Roman had such a complex and tragic backstory, plus let’s be honest, he’s HOT. (I kept imagining Alexander Skarsgard as the character since he was described as being tall, with longish blond hair.) I can’t wait to see where the Dylan/Roman relationship goes in future books, especially since things left off in a very interesting place for them.

Also, I want to find out what happens with Dylan’s other sisters. (Middle sister Sera has powers and an unhappy love life while Reid, the youngest Apel sibling, seems to have missed out on inheriting any witchly gifts and she’s got a thing for their hunky next-door neighbor.)