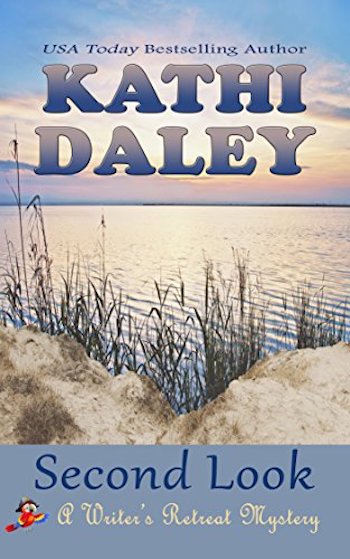 Caring and compassionate characters, an intriguing mystery to try to solve, a touch of sweet romance.

Jack and Jill and the entire gang from the writers retreat agree to take a second look at a five year old murder investigation.

Five years ago award winning actor Rhett Crawford threw a Halloween party for a group of family members and friends. The party, which actually took place over a four day weekend, was held at his beachfront estate on Gull Island.

On the third night of the party the groundskeeper, Wylie Slater, found the body of one of the guests, Georgia Darcy, bludgeoned and left in the toolshed beyond the garden. The authorities were notified immediately and interviews of all guests on the property were conducted.

It was eventually determined that the victim’s date, a man named Dru Breland, had most likely killed the woman before fleeing the scene of the crime.

According to witness statements, Georgia and her date had been bickering constantly during the course of their stay, and more than one witness had seen Dru slap Georgia before stomping off on the night she died. The authorities conducted an exhaustive search but were unable to locate Mr. Breland.

As far as anyone associated with the investigation could find out, he was never seen again. Dru was a wealthy man with a depth of resources. It was assumed by most that he had fled the country and started a new life elsewhere under an assumed name.

Then five days ago, the oceanfront estate, once owned by Rhett Crawford but now owned by an out of state developer, had been scheduled for demolition. During the destruction of the house a human skeleton was found in a hidden room off the wine cellar.

After a thorough investigation by the medical examiner and his team, it was determined that the body in the hidden room was in fact the decomposed remains of murder suspect, Dru Breland. My friend Jackson Jones, owner of the fledging Gull Island News, latched onto the story and seems determined to find out who killed Georgia Darcy five years ago, and how her date, Dru Breland, ended up in the secret room.

Jack knew that the five year old mystery would be a complicated one to unravel, so he asked me, Jillian Hanford, if I would be willing to present the mystery to the writers group I currently lived and sleuthed with. I agreed to Jack’s request which brings us to the regular Monday meeting of the eclectic group of writers I call friend but consider family.

Second Look is the second novel in Kathi Daley’s A Writer’s Retreat Southern Mystery series and it’s an awesome and delightful read. Ms. Daley’s writing style flows smoothly and she provides great background information about the characters and town. The characters are well rounded and affable and the mystery well plotted.

Once again, Ms. Daley has provided readers with a clean read, filled with caring and compassionate characters, an intriguing mystery to try to solve, a touch of sweet romance. There are lots of twists and turns to keep the reader engaged and guessing; and the final reveal came as quite a surprise to me. I highly recommend this book to anyone who enjoys reading well-crafted cozy mysteries.

Jillian ‘Jill’ Hanford, a former New York newspaper reporter, is helping her half-brother, Garrett Hanson, who recently suffered a stroke, to oversee scheduled renovations at his resort on Gull Island, a small island off the South Carolina coast.

Jill has turned the resort into a writers’ retreat. In addition to being a sounding board for each other, the group enjoys working together to solve real life mysteries. Jill’s friend, Jackson ‘Jack’ Jones, is a well-known author who recently moved to the island and fulfilled his lifelong dream of writing for a newspaper by purchasing the Gull Island News. Jack comes to the group, which he calls the Mystery Masterminds and asks if they would be interested in helping him look into the five-year-old murder of Georgia Darcy that he’s writing an article on for his newspaper and they jump at the chance.

Georgia’s murder has resurfaced because during the demolition of a mansion, the skeletal remains of Dru Breland, the person everyone believed murdered her, is discovered in a hidden room. Georgia was murdered during a four-day weekend Halloween party hosted by Rhett and Hillary Crawford, that she and her date Dru attended, along with six other guests; the groundskeeper and a cook were also present. Forensics determined Dru was murdered about four years after Georgia’s murder.

The group interviews people and research everyone’s backgrounds to determine who killed Georgia Darcy five years ago, how Dru ended up in the secret room, and who murdered him. Deputy Rick Savage is coming around to accepting help from the group and sharing information with Jill and Jack, with the caveat that everything is to be kept ‘off record’ and everything they learn is to be shared with him.

Jill finally agrees to go on a date with Jack. During the course of the investigation, Jill realizes how important the group is to her and that they are the family she never had.