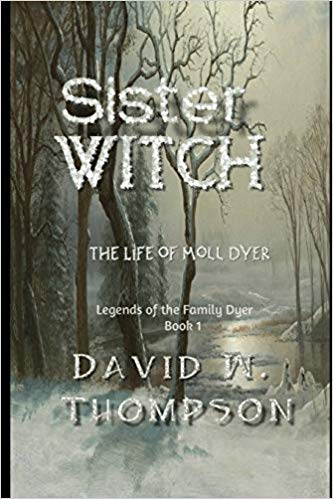 Memorable historical fiction packed with an abundance of action, adventure and even the supernatural.

Moll Dyer wants to leave her troubles behind when she immigrates to the New World… but even an ocean cannot keep the Dyer family curse from following her! Wanting only to find peace, she fights injustice in a new land founded on tolerance but ruled by bigotry.

In 1607, the ancient enemy returns, and Moll takes a stand. 300 years later, is the world finally ready for Moll’s story?

Life in the British colonies is tough on man and woman. Hunger, disease, Indian attacks, and drought test the resolve of the settlers daily.

But troubles for the Dyers include another threat. In this land of religious fervor, devastating sickness, and persistent greed, can Moll turn back the evil alliance formed against her and her bloodline?

Or will hell’s bloody wrath extinguish her dream of a new life in the New World? How far will she go to protect her family and their world?

Faith despite Betrayal. Courage in the face of Injustice. The triumph of love.

The legend of Moll Dyer originated in earliest colonial Maryland. Despite 300 years of civilization, and the advent of scientific reason, Moll’s name is still often heard there, especially around campfires late at night, or as a warning to misbehaving little people. Her spirit is often seen as a wisp of unnatural fog in the swampy woodlands near her homestead, with her half-wolf companion at her side.

“Sister Witch” is the 2018 winner of the Golden Quill award for Paranormal Novel of the year. It was also voted best Magical Realism novel by the “Editors and Predators” reader’s poll.

Are you a fan of historical fiction? Perhaps you enjoy action, adventure and even the supernatural? If you answered in the affirmative to any of these questions, then Sister Witch: The Life of Moll Dyer, may be just what you are looking for!

The story is focused upon the main character, Moll Dyer, who travels to Maryland from England with her Uncle Sean. She is basically forced to leave as she had been assaulted and left pregnant by her attacker. For an unwed woman to be in such a state would only bring shame and persecution to her family, and a new life in America was the only viable option. For the sake of her family, both Moll and her Uncle needed to escape from their past so they could start anew.

During the journey to America, Moll befriends a couple named Beth and Gideon who were expecting their first baby. However, it becomes a disastrous trip for Beth who is often ill and in a very poor state of health. Moll attempts to help Beth by teaching her about the medicinal benefits of roots and plants. Tragically, both Beth and the baby pass away leaving the husband Gideon totally distraught. In such a state he accuses Moll of being a witch and causing his wife’s death. These accusations are a pivotal point in the novel as they will follow Moll to her new home in America.

After a journey filled with hardship and heartache, Moll and Sean settle in Maryland and begin to build a farm together in which to raise Moll’s unborn child. Moll soon gives birth to a boy she names Zachary and passes him off as her brother to the villagers. The unorthodox family continues to farm their land and grow their presence in the area. However, times are difficult for the colony and when a devastating illness and epidemic arise, “Moll the Witch” becomes an easy scapegoat.

Will Moll and her family survive such persecution? Will the colony drive her from the life she has tried so hard to build? Or will Moll convince them otherwise and help to heal their ills? The answer is both intriguing and provocative.

Undoubtedly, the author has done very diligent research when composing this novel. The story of Moll Dyer is legendary and actually inspired the plot of the film “The Blair Witch Project.” However, this story is about much more than witchcraft and persecution. While it is certainly reminiscent of the Salem Witch Trials, the plot and setting are far more variegated.

In his work, Sister Witch, David Thompson aptly explores a variety of historical issues such as slavery, religious intolerance and the issue of women’s rights. Such significant and perplexing topics are expertly weaved into this spellbinding and fascinating story which comes to us from the mind of the author. It takes a great deal of skill to make that happen.

Moll as the heroine of the story, who is maliciously maligned throughout, is very believable and she grows in her credibility with each passing page. The secondary characters whether they be friends such as Nema and Bluebird, or foes in the form of Peter or Gideon at the outset, are also very well presented and add elements of love, loyalty, hatred, and revenge.

In regards to an appropriate audience for this novel, I would place it at a young adult and up. It is a thoroughly enjoyable read for that group, but certain explicit scenes make it inappropriate for younger readers. History buffs and fans of the supernatural alike will find a lot to enjoy in this work. Also, the theme of sacrifice for others stands out as very prominent and convincing.

Sister Witch is the story of perhaps Maryland’s most famous witch, Moll Dyer. The novel portrays her as a courageous and determined woman with opinions and beliefs far ahead of her time. I found myself cheering when she took an unpopular, progressive stand, but also cringing when she took another step toward what I knew to be her fate.

Certainly, she had some unusual beliefs, such as in her ability to create love potions or protection spells. But they were harmless … at least until other people discovered she held those views. And when that happened, the woman became the target of suspicion and then, hatred. Over the course of the story, she was held accountable for everything from stillbirths to season-long droughts.

The first two-thirds of the book is a chance to study the psychology of a unique individual and the sociology of a superstitious and sometimes violent society in which she lived. And lest I make the novel sound dry and academic, author Thompson makes you feel Moll’s determination and dedication to family as well as her isolation, pain, and finally, her tenuous grasp on reality.

And while I’m no expert on language, the more formal wording of Moll’s speech and thoughts felt realistic to the time and I enjoyed listening to her. For example, while this observation is still made today, I appreciated the way she (via Thompson) phrased it. “Men are such poor custodians of the heart, its language is foreign to them.” It is historical fiction at its best.

In the last third or so of the book, the flavor shifts and the supernatural plays a much more prominent role. The ‘twist,’ if it’s possible to have one in a story so well-known is that in her need to secure a future for her family, she called upon dark powers.

She no longer sought only protection from her enemies; she desired their downfall. And in the end, she had to pay the price for those wishes. Personally, I didn’t need this aspect of the book, but I fully understand why it was included. To write about the folk legend that is Moll Dyer without reference to the paranormal is to leave the story half told.

Overall, the book is excellent historical fiction, rich in the language, thoughts, and beliefs of the time and the life of one strong, courageous woman wronged by society. And if you like your historical fiction with a bit of paranormal spice, you’ll love Sister Witch.