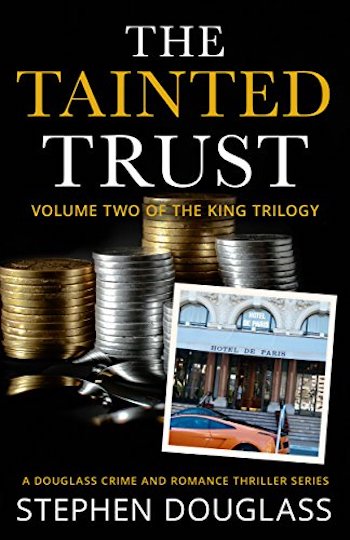 From cover to cover, this story is extraordinary, finely honed, suspenseful, romantic, and a total thrill ride.

The Tainted Trust is a great crime and romance thriller, a brilliant depiction of what perfectly normal people will do for love and money. It is the continuing story of an inconvenient fortune and its catastrophic impact on a loving family.

No one wept when Jim Servito died. He left an estate amounting to $325,000,000 when his wife, Karen killed him in Caracas. He had accumulated the fortune the old fashioned way: he stole it from the U.S. and Canadian Governments using a brilliant gasoline tax evasion scam. The money is hot, deposited in a Cayman Island bank, and it is cursed. It has a profound effect on everyone who touched it. It is managed by Alfred Schnieder, an aging and unscrupulous Caracas banker.

Mike King, the love of Karen’s life, and nearly ruined by the Feds’ scorched earth efforts to recover Servito’s fortune, convinces her to keep the money, instead of returning it to its rightful owners. With the assistance of Schnieder, they form The King Trust, a near fatal mistake. Desperate to recover the money, the Feds continue to spare no expense and effort to do so. Phillip, the only child of Karen and Jim Servito, assumes he is the natural heir to his father’s fortune, and has his own greedy plans for the money. Aging Alfred Schnieder relinquishes the trust’s management to Louis Visconti, a thirty-two year old Wall Street whiz kid and brilliant financial engineer. Dubbed ‘The Crown Prince of Wall Street’, and substantially more unscrupulous than Schnieder, Visconti takes The King Trust to bewildering heights, then fails, miserably.

Kerri Pyper, Mike King’s twenty-three year old estranged daughter, has not seen or communicated with her father since she was nine. She discovers the existence of The King Trust and is shocked to learn that her natural father is its Trustee. Visconti, desperate and assuming he is still the smartest man in the room, embezzles the fortune and flees to Monaco. He made only two mistakes: he deceived both Mike King and Alfred Schnieder, and fell in love with Kerri.

This is another magnetic novel written by Author Stephen Douglass. It kicks off in New York City, 1980, with Louis Visconti, 33 years old, multimillionaire, living the lavish high life. His passion is possession and power, never interested in crossing the bridge into marriage. He is an investment broker for the Wall Street firm of Mara, Griesdorf and Visconti.

In the previous novel, Jim Servito’s death left more than 300 million dollars that was from unpaid petroleum taxes money laundered from Canada and the United States. Mike King maneuvers that money back from the Cayman Islands into the United States as a trust fund managed by Louis Visconti. Karen Servito, Jim’s widow, and Mike King are now married and Mike has legally adopted Phillip, Jim’s son at 10 years of age.

Though Phillip is the sole beneficiary of his father’s estate, Mike and Karen are overseeing the management of the trust fund. Move on to 1987 and the situation in the middle-east is threatening to explode like a drum of oil. They’ve produced more oil than there are buyers. OPEC’s control has weakened because of greed and the oil prices rise. Suddenly, almost without any warning or symptoms, on October 19, 1987, the great fall of Wall Street occurs, known as Black Monday. Visconti has been in the Bahamas in isolation from news and phones.

When he returns, King’s trust which had climbed in value to over 800 million has now been reduced to the original 300 million. But he does not divulge this loss to King … Visconti has mismanaged the trust all along, and he also knows of the secrets of how the money was laundered. Soon, Jim Servito’s daughter, Kerri Pyper, 21 years old, married to Brian, a profession football player, arrives in New York City and is looking for a job.

Disaster strikes her husband on the football field, the marriage fails, and before long she becomes romantically involved with … Louis Visconti. This novel reveals the highs and lows of Wall Street, and how it impacts so many lives which seem to rise and fall just like Wall Street.

From cover to cover, this story is extraordinary, finely honed, suspenseful, romantic, and a total thrill ride. I’m looking forward to reading the last of The King Trilogy. Highly recommend this powerful story.

The Tainted Trust is the sequel to The Bridge to Caracas—and it is equally as good. In the first book, Joe Sevito had defrauded the American and Canadian government with a complex gasoline tax evasion scheme. When he realized that his wife, Karen, had reconnected with Mike King, who was her first love, Joe set up an elaborate scheme to frame them both for his crimes. Then he kidnapped his son and took him to Caracas with him, believing that Mike and Karen would spend the rest of their lives in jail. He introduced the boy to Alfred Schnieder, a bank manager in Caracas, and instructed Schnieder to make Phillip his beneficiary.

When Joe met his untimely death in Caracas, he left an estate valued at $325,000,000.00 in an account in a bank in the Cayman Islands. Phillip led Mike and Karen to Schneider, and eventually the money. The money should have been returned to the Feds, but Mike was so angry about the way they had treated him and Karen, that he refused to do the right thing. The money was hot, and represented too great a risk to move. Karen and Mike convinced Schnieder to set up the King’s Trust and manage it.

In The Tainted Trust, the ageing Schnieder contacts Louis Visconti at Mara, Griesdorf and Visconti. He is a thirty-two-year-old who is known as ‘The Crown Prince of Wall Street’ because of his phenomenal success as a Trader. Schnieder has a plan, and Visconti is an opportunist. He quickly agrees to the terms, and waits for Schneider to prompt King to come his way.

Under Visconti’s management King’s Trust grows phenomenally over the next 7 years. Then, on the one weekend that he decides he needs to get away from the phones and take a break, the stock market crashes. No one can get a hold of him so he can do damage control, and when he comes back to town he finds out that the company has taken a big hit. On October 19, 1987 King’s Trust has lost half a billion dollars on paper. Viisconte is desperate to recoup the money quickly, and save his reputation. And his pride.

He turns to Miles Dennis at Iacardi & Sons. Miles Dennis has made fortunes for people in commodities, and Visconte wants him to go short and buy contracts in the volatile crude oil market for him. On his first visit, Miles Dennis discourages this plan, advising him to wait for a few months.

Visconti is desperate but listens to him. To save face, he falsifies his annual report and doesn’t reveal to Mike King the true position of the trust. Visconti has started down a treacherous road of desperation and deceit. In 1988 he continued to confer with Miles Dennis, who consistently advised him against his plan

In October, 1988, Kerrie Pyper takes a course in commodities at Long Island Community College. Miles Dennis is the instructor and he is impressed by her keenness and aptitude. At the end of the 40-hour course, he hires her as his assistant.

On February 23, 1989 Visconti is determined to jump into the crude oil market. He shows up at Miles Dennis’s office again. There he meets Kerri Pyper and becomes besotted with her. She is married to Brian Pyper, the famous New York Jet’s star quarterback. As her marriage hits trouble times, Visconti befriends her and does his best to make the marriage fail. He will be there to pick up the pieces. Eventually Kerrie turns to him. Visconti is confident that his crude oil contracts will restore his wealth and he will have the love of the beautiful Kerrie Pryor.

The best-laid plans of man can fall apart. The beautiful Kerrie Pryor is no fool, and she is loyal to those that she loves. When she discovers that Visconti is not who he portrays himself to be, she vows to take him down.

THERE ARE NO SPOILERS IN THIS REVIEW. Stephan Douglass once again has created a complex, captivating plot. I read this book long into the night for 2 evenings. I loved his portrayal of the characters. Visconti, so proud and driven to make more money. Kerri so intelligent and loyal, but strong and determined when she realizes how corrupt her lover really is.

Please click HERE to find The Tainted Trust on Amazon.