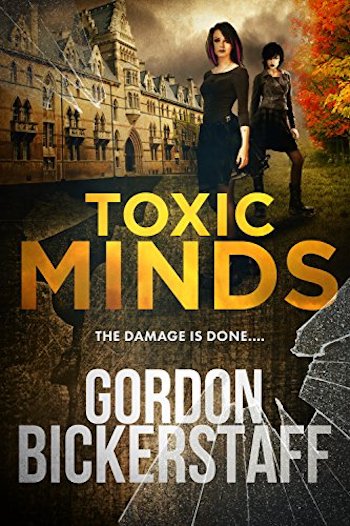 A perfect storm of dreadful nightmares bears down on her.

The damage is done… Alexa Sommer had it all – then came meltdown, and divorce as she is forced out of her job. Desperately, she tries to reconnect with her family and rebuild her life in a new job. But her work is controversial, and her enemies plan to stop her by any means.

Alexa’s new colleagues have a compelling reason to want her sacked. Gavin Shawlens is a colleague, and he is all Alexa has on her side as a perfect storm of dreadful nightmares bears down on her.

Another great thriller from the talented Gordon Bickerstaff! After reading previous books in the Gavin Shawlens series, I became quite attached to Gavin as a character, who seems to attract trouble and get involved with major scale conspiracies and plots against his will.

Toxic Minds is no exception, and even though in this fourth installment Gavin plays a secondary role, with all the attention concentrating mainly on Alexa, a driven and career-obsessed fracking specialist, Gavin still is in the thick of it, this time in an effort to stop a radical terrorist cell.

In Toxic Minds there’s a little less action and more psychological aspects, and this made the book even more interesting to read, for me personally. I really enjoyed watching Alexa’s character grow and realize the mistakes she’s made, and fix them for the sake of her family, which has basically fallen apart from her negligence.

I felt incredibly sad for Becky, a teenage daughter who wasn’t able to handle too much pressure and fell under the influence of the most dangerous people, who would use her against her mother in their game… Without giving away any spoilers, let me just tell you that this thriller is very well worth reading, and you won’t be able to put it down until the last page has been turned. A great read!

This was a most enjoyable read. To describe it, I would have to say that it was both psychological and sensitive. The story is centered around Alexa Sommer, a devoted mother, a woman on the brink of divorce and with personal problems encroaching on her workplace. She is highly motivated, but not everyone sees her vision or will allow her progress in the industry to continue…perhaps Gavin

She is highly motivated, but not everyone sees her vision or will allow her progress in the industry to continue … perhaps Gavin Shawlens is the only ally she can rely on in the dangerous situation in which she finds herself.

Here’s what I liked about the book. The writing was complex at times with various plot strings knotting beautifully together. The writer has a suspenseful style that compelled me to read on and on until the very end. The story was engaging and the characters were believable because of great dialogue.

I may not be telling you what the book is about, but I am sharing my admiration for the author’s writing skills. A 5 star from me.