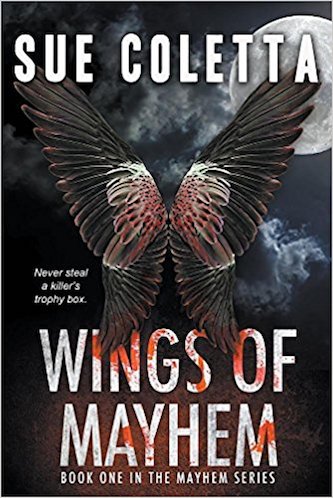 Mr. Mayhem storms on the scene with style, grace, elegance, and a zest for life unlike any other.

Sue Coletta lives on the dark side of a darker shade of black. Well, maybe she doesn’t, but her characters certainly do. She admits that Edgar Allen Poe had a profound effect on her and now her writing. As she says: “What I wouldn’t give to crawl inside his mind for an hour.”

It would be a nightmare.

She points out, however, “It wasn’t until I read Silence of the Lambs that I found my niche. Thomas Harris breathed life into the serial killer thriller, and he remains a guiding force in my writing. To create something as amazing as that novel is, in my eyes, the pinnacle of success. I strive to reach that level with each new book I write.

In her Mayhem series, Sue has tactfully created one of the most intriguing and suspenseful duels in modern literature.

Shawnee Daniels is never the woman she wants you to believe she is. By day, Shawnee is a respected hacker for the police department. Got something to hide? Don’t bury it in a computer. You can’t bury it deep enough. Shawnee will find it.

But if she’s the hero, who’s the villain?

Mister Mayhem may well be the most chilling, most evil serial killer you will ever meet. Pray you don’t meet him alone. Or in the dark.

If Edgar Allen Poe read her Mayhem series, he would want to crawl inside her mind for an hour.

But then, Poe loved his nightmares.

Shawnee Daniels — cybercrimes specialist by day, cat burglar by night — ignites the hellfire fury of a serial killer when she unknowingly steals his trophy box.

A SERIAL KILLER STALKS THE STREETS…

Cat burglar Shawnee Daniels always believed her “fearlessness rules” mantra would keep her on top and out of jail. When she hacks a confiscated hard drive at the Revere P.D., she focuses on a white-collar criminal accused of embezzlement. To teach him a lesson and recoup the funds she breaks into his massive contemporary in Bear Clave Estates. Jack has even more secrets, deadly secrets, secrets worth killing over.

A CAT BURGLAR PICKS THE WRONG HOUSE TO ROB…

Shawnee thinks she made it out clean until a deadly package arrives at her door soon after. He’s found her. As a glowing eagle taunts her Skype screen, Jack tells her she stole his precious trophy box — and he wants it back!

When her “helpful” best friend convinces her to date charismatic Detective Levaughn Samuels, her two worlds threaten to implode. Ordinarily Shawnee keeps a firm line between her professions, but dating Levaughn might help her get this psycho off her tail.

AND NOW, NO ONE IS SAFE…

In this lightning-fast-paced psychological thriller of secrets and lies, Shawnee juggles being stalked by a serial killer, dating the lead detective on the case, and tap dancing around her librarian best friend.

If she doesn’t find the trophy box, the killer’s coming for her. If she doesn’t expose her secrets and lies, more will die. And if she does, she could lose her freedom and everyone she holds dear. 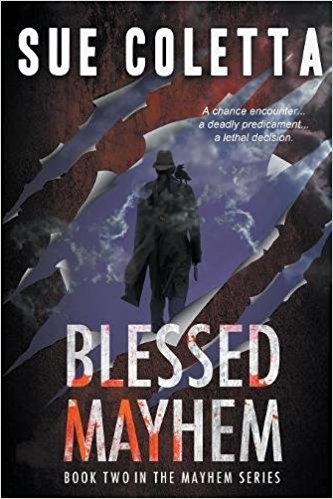 A chance encounter …a deadly predicament …a lethal decision.

The infamous Mr. Mayhem is not your average serial killer. Reminiscent of the beloved Hannibal Lecter, minus his thirst for flesh—because eating humans is just plain rude—Mr. Mayhem storms on the scene with style, grace, elegance, and a zest for life unlike any other. Impeccable manners also help. He may commit murder, but there’s no reason to be impolite about it.

Accompanied by his loyal crow companions, Poe, Allan, and Edgar, his crimes strike fear in the hearts and minds of folks across Massachusetts’ North Shore. When Shawnee Daniels—cat burglar extraordinaire and forensic hacker for the police—meets Mayhem in the dark, she piques his curiosity. Sadly for her, she leaves behind an item best left undiscovered. Or is it serendipity by design?

Color him curious, but he yearns to examine the psychology behind her life choices, tough girl routine, witty banter, and unique double-life. In a different time and place, they may even become friends. But unfortunately, their predicament defines the risk.

The stakes are too high to stop now.

For reasons authorities cannot fathom, these seemingly unrelated murders will go down in history as the most impressive killing regime of all time. His coup de grace, if you will. Even if it means permanently erasing Ms. Daniels from the equation.

All the pieces are there if the authorities look hard enough. The question is, will they? The only new wrinkle is Shawnee Daniels, and she may be his toughest opponent yet …if she’s clever enough to play the game.

Gallery image with caption: John Dolan: One of the Top Ten Crime Thriller Writers You Need To Be Reading