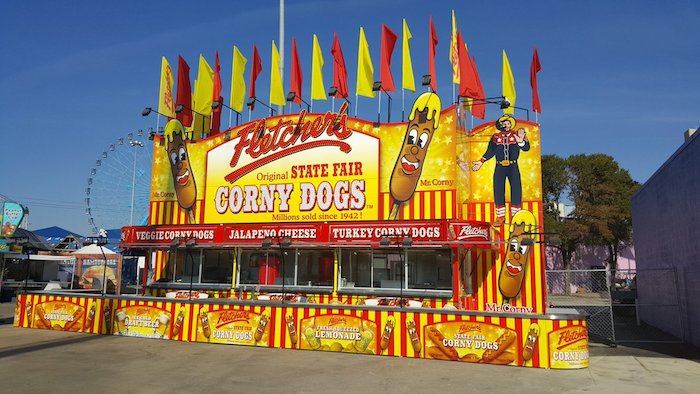 Back in the day, food items that didn’t mix well with thrill rides were limited. Now if it’s not fried it’s not food.

It is likely true of all old-timers recalling pre-school memories. At times, weren’t we all scared of our own shadows?

As a five-year-old, holding tightly onto my parents’ hands, I took on the terrors of the midway when a carnival came to town. It was frightening enough to simply jostle through the crowds, and fears heightened as that first ride loomed.

It was unnerving, sitting atop the carousel hobby horse, even though my steed’s only movement—upward and downward–was slow. Besides, my mom and dad were alongside in case I toppled off on either side….

That was the beginning. At ride’s end, I was only slightly dizzy, thankfully unaware of future moments when there’d be much more to “churn up my innards,” one being rides on the breathtaking “Tilt-a-Whirl.”

It left riders “all shook up.” I’m so glad that my growing-up years did NOT include current amusement rides like Six Flags Over Texas’ Shock Wave and numerous other fright-inducing roller coasters.

Now, there are ever so many more ways to become faint. Consider zip canyons, some claiming to drop thousands of feet to end up in ZIP codes different from where they began. And, if there’d been bungee jumps during my pre-school years, I’d never have made it to first grade….

Back in the day, food items that didn’t mix well with thrill rides were limited. Cotton candy comes to mind.

Fast forward to current times, and do the math on many additional foods that cause nausea.

One need only visit the State Fair of Texas, where “pre-fair” publicity is generated by new deep-fried items introduced annually. Any of the dishes likely would do me in. Prizes this year were for Cotton Candy Taco, most creative; Fernie’s Hoppin’ John Cake with Jackpot Sauce, best-tasting savory; and Arroz Con Leche (cinnamon-spiced rice balls), best-tasting sweet. Over the years, there has been virtually everything one can imagine “deep-fried.” Partakers ingest the “treats” gleefully, many admitting that later, they’ll call to mind the old Alka-Seltzer commercial: “I can’t believe I ate the whole thing.”…

No longer do we live in a vanilla/chocolate/strawberry world. Baskin-Robbins took care of that with the introduction of 31 flavors of ice cream in the 1950s. Yep, since then, making choices can take more time than servers need to scoop the frozen treats.

Now, throw grocery items into the mix. What with non-fat, low cholesterol, lactose-free, gluten-free and much more, one wonders about challenges for employees. They must gather up groceries ordered on computers, doing so with warp speed to allow timely curbside pick-up or delivery.

It’s hard to spotlight individual brands that are foundational in the expansion of food choices, but if I had to pick one, it would be Oreo Cookies….

Not many years ago, Oreos were, quite simply, black and white.

If you haven’t noticed, Oreo offers MANY more flavors now, and they remain the world’s most popular cookies. Part of the ongoing success goes to Oreos becoming “culture-specific.”  For example, two new Oreo flavors available now in China are hot chicken wing and wasabi.

Oreos’ popularity in China “took off” with the introduction of these and other flavors.  We are told that distribution may be limited to China.  In this case, let us hope that what happens in China stays in China….

Words printed on our rearview mirrors warn that vehicles shown thereon may be closer than they appear.

Would that there might also be warnings in the future that there’ll be more choices than any of us would like to make. Almost certain to be included will be even more thrilling amusement rides and food choices.  We’ll wish then for simpler “dizziness,” such as that of a youngster atop a hobby horse on a carousel.

I’ll attempt to simplify, and invite others to join me.  Let’s start with a simple menu for dinner.