Inside the Literary Mind of Alana Woods 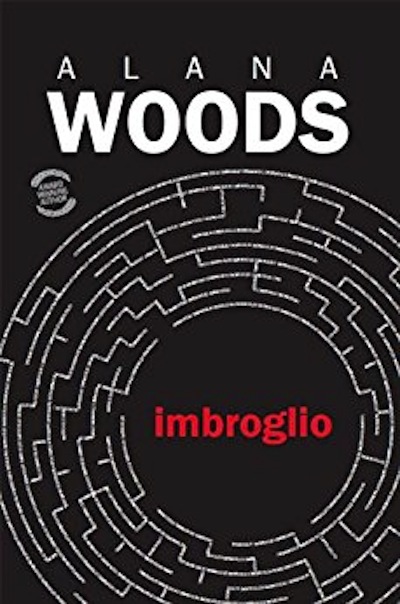 Enter into Imbroglio at your own risk. It is a maze of intrigue and danger.

Will any of them survive to leave the maze alive?
I am interviewing novelist Alana Woods who is a storyteller with a bent for excellence. It can take her years to be satisfied with the quality of a story.

Alana: That would be IMBROGLIO, which, while it’s my latest published book, isn’t hot off the press. I’m still working on the new one. We—husband John and I—have just been through months and months of selling our home and packing up in one state and buying and relocating in another—and I’m having a hard time tearing my mind from all the things that a new home distracts you with—décor, garden etc—and back to the business end of things.

The inspiration for the book was pure and simply wanting to get on paper this tale I’d been entertaining myself with for some years since leaving a job in a weapons research facility. I’d spend hours in my mind with the characters, throwing challenges at them to see how they’d react. I used to have a hard time returning to reality because I liked them so much and finally I thought it was about time I brought them to life.

Alana: A serious writer?—that would be when I about thirty. I think I must have been a storyteller before I could talk and walk. Some of my earliest memories are of daydreaming, seeing things and people and imagining stories around them. Purely for my own entertainment, you understand. And I never stopped. I wasn’t a confident kid and was therefore a bit of a loner, so staying in my mind was my comfort zone. I started writing short stories in high school but it wasn’t until I was in my early 20s that I worked up the courage to send one off to a magazine. The rejection letter sent me straight back into my shell—until the day I threw down a book in disgust after reading it saying, ‘I could do better than that’ and my husband uttered his now family-famous words of ‘Well, why don’t you then!’ To his credit he’s never asked me to stop, even though I’m yet to buy him the red Ferrari he’s always yearned for.

Alana: It’s authors rather than books that have influenced me. Two in particular, for their ability to tell a cracker of a story and for their writing styles. One was Dorothy Dunnett, a Scottish writer whose way with words is legendary among her fans. You don’t want to resurface from her books, they’re that good. And the other was Dick Francis who was one of those writers with a deceptively simple style that you knew required great skill. Earnest Hemingway had it too. My style is somewhere between Dunnett and Francis, or at least I like to think so.

Alana: They come from anywhere. It can be something I see on the street or in the news, something I overhear or dream. A lot of ideas I discard because, after thinking about them for a bit, they don’t go anywhere. Those that have made the grade have so far been sparked by jobs I’ve had: five years as a court reporter gave birth to AUTOMATON; a job—as a typist, nothing fabulous—at a weapons research facility was the catalyst for IMBROGLIO; another job in Australia’s Consumer and Competition Commission as its Director Publishing gave rise to the corporate legal thriller I’m currently working on; the theft of jewelry at my daughter’s wedding in Italy in 2013 was almost immediately material for my partly-written near-future thriller; and a dream—quite a frightening one—led me to the one I’ll be writing after that.

Alana: I’ve never consciously had to think about characters and personalities. They just appear alongside the story ideas. As the story unfolds, so do the characters. I like to write like that, not really knowing how they’re going to react until they’re presented with a situation.

Alana: In the early days when I was physically visiting bookshops flogging copies of my first book AUTOMATON one manager read the first page and said, “It’s quite literary, isn’t it.” It pleased me she recognised that, because ‘literary mainstream’ is what I had striven for, and is what I continue to strive for.

Alana: For me the difficult part is revision. I put completed drafts away for a while, sometimes years, so that by the time I get them out of the drawer I’ve pretty well forgotten them. That way it’s like reading a book someone else has written. And the flaws just LEAP out. The book I’m currently working on is like that. It needs quite a bit of work and I’m finding it hard to get started on the rewrite—the new house décor and garden, while legitimate excuses, are still just excuses.

Alana: I have two thrillers underway and a third in my head. I’m consciously trying to avoid coming up with more ideas because I think three is enough to be going on with. One is a completed draft which needs revision, that’s the one I’m having trouble starting. It’s a corporate legal thriller. The second is partly written; it’s a near future tale looking at where current world events may take us. And the third, as I say, is still in my head.

A parting observation: I call my books thrillers because that’s how publishers have categorised them over the years, but to me they’re not a snug fit in that genre. To me they’re suspense intrigue. The plot line is important but it’s the characters that are paramount. It’s only by fleshing out the characters, making them real, with all the idiosyncrasies, passions, faults, virtues and contrariness of real people that you can sink them deep into an absorbing story.

Now go read them and afterwards let me know if I’ve hit the mark with them. Please.