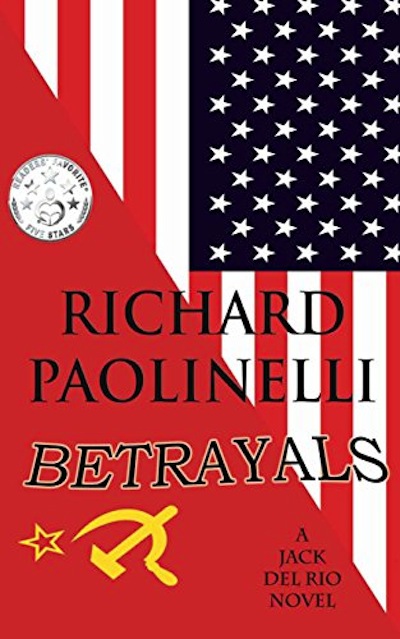 Jack Del Rio grabbed me by the collar and drew me into his world; one of conspiracy, espionage, betrayal, and loyalty.

Betrayals, a compelling political conspiracy mystery thriller, heralds the return of FBI star agent, Jack Del Rio, who is perhaps the only man in America who can stop the strings of assassinations and conspiracies that threaten to topple the entire government administration and bring the United States under the thumb of evil dictatorship.

Unable to trust even his closest friends and allies in the Bureau, Jack must first survive multiple attempts on his own life then sort out the evil doers who have wormed their way into top positions and do this in time to save the President of the United States – who may just be one of the conspirators himself.

It’s a race to the finish and the devil takes the hindmost.

Born in Turlock, California in 1964, Richard Paolinelli began his writing career as a freelance writer in 1984 in Odessa, TX and gained his first fiction credit serving as the lead writer for the first two issues of the Elite Comics sci-fi/fantasy series, Seadragon. In 1991 Richard began his sports writing career at the Gallup Independent before moving on to work for the Modesto Bee, Turlock Journal, Merced Sun-Star, Tracy Press, San Mateo County Times and the San Francisco Examiner. He also served as an editor and photographer with some of the newspapers. He won the 2001 California Newspaper Publishers Association award for Best Sports Story while at the Turlock Journal.
In 2013, Richard retired as a sportswriter and decided to return to his fiction writing roots. He released two short stories – “The Invited” and “Legacy of Death” – as well as a full-length sci-fi novel, Maelstrom. In 2015, Richard completed nearly two years of research and interviews and published, From The Fields: A History of Prep Football in Turlock, California, chronicling 95 years of high school football in his hometown. One month later, the first book of the Jack Del Rio series, Reservations, was published by Oak Tree Press.

In 2016, Richard was one of a dozen authors selected to participate in, Beyond Watson, an anthology of original Sherlock Holmes stories and was one of twenty writers involved in a second Holmes Anthology, Holmes Away From Home, released in December. Perfection’s Arbiter, a biography of National League Umpire, Babe Pinelli, was released on October 8th. W & B Books acquired the Jack Del Rio series and released the second book, Betrayals, in November. The remaining two books in the Jack Del Rio series will follow in 2017 & 2018.

In January of 2017, Richard returned to his science fiction roots with the release of the novel, Escaping Infinity, and hopes to release another sci-fi novel, When The Gods Fell, later this year.

Review by Jeanie:
Paolinelli does another outstanding job with Betrayals, the second in the Jack Del Rio series. Jack grabbed me by the collar and drew me into his world; one of conspiracy, espionage, betrayal, and loyalty.
The FBI, CIA, Secret Service, and our Armed Forces are what we depend on to protect us and our president. Jack never lets you nor his beloved Untied States of America down. The scenario depicted is not only plausible but also possible; that’s what makes your heart race.
Absolutely love his style.