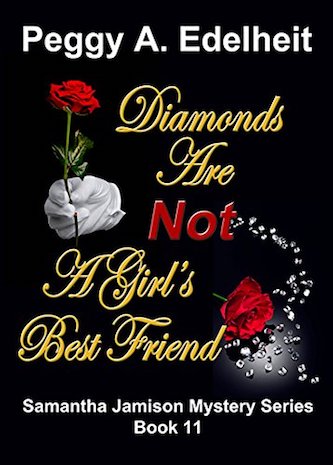 Bold energetic language makes this a dynamic read even before the addition of the snarky, hilarious protagonist!

Blinded by all that glitter, Sam ends up in a double-blind conspiracy, resulting in a gem of a mystery.

REVIEWERS: “Ms. Edelheit seems to have been able to strike a nice balance between light heartedness and serious investigation.”

“Loved the style and story”

From Peggy A. Edelheit:

Although a series, all of these books are standalones. They are light-hearted mysteries with a touch of humor, romance, suspense, face-paced action and adventure.

They are perfect escape and beach reads. So, sit back and enjoy a laugh or two watching Samantha (from her perspective only) solve these contemporary, plot-driven tongue-and-cheek whodunits filled with humorous satire, in which the reader engages in the same process of deduction as she does.

Stop by my website, samanthajamison.com to read some personal and occasionally humorous posts of mine that inspired some of these mysteries

My mind was tangled with chaotic, frustrated thoughts.

By the time I’d made it halfway along the woodline of the front field, I began to relax but then–Mid-thought, a sound drew my attention.

A branch had snapped loudly nearby … wild animals.

My eyes scanned the area. It came from the forest that lined the entire length of the front field and paved walking path. I’d walked roughly a quarter mile from the house.

I could spot portions of the house lights, but with all the Norway spruces between the house and me, I doubted anyone could spot exactly where I was standing from there. It was almost dark. But it didn’t matter. No one was inside anyway. Everyone was out back, unaware I was even gone.

Besides, I was safe with all the security here.

I scanned left then right. Something was out there in the woods. I stood in place, expecting an animal to step out.

Then the birds in the nearby trees briefly went silent.

I jerked at another loud, brittle snap.

It sounded closer this time. But logic kept reinforcing what was likely out there, nothing but wildlife.

I waited patiently, but at the echoing crack of another branch, paranoia and suspicion began to slowly edge in.

Who or what was it? Could they see me on the path?

In a flash, I considered an unwelcome prospect: the heavy steps of a human within the woods. I quickly glanced at the faintly moonlit path both ahead and behind me.

This was a secure property … up to a point.

Even though it was fenced with the gates closed, like now, anyone could scale the fence if they were determined to get in. All the security cameras were located at the gates, plus mounted on the house itself, not out here in the far front field at the edge of the dense woods next to me.

Had someone cut through the forest off the main road?It had thick, huge fallen tree trunks strewn everywhere.

Getting through would be a considerable physical task. Possibly an ATV?

Even an all-terrain vehicle couldn’t get through that old tree-cluttered forest. Besides, I would’ve heard the engine.

But someone could’ve roughly hiked through it.

After a minute of silence, I glanced around. Maybe I had overplayed what was in the woods. But then perhaps–

Loud rustling of dried leaves off somewhere to my right.

I pivoted, focusing on the shadowy forest still crawling with leafy, wild vines. I glanced up. Dusk was long gone. All I caught around me was moonlight and shadows.

A sharp foreboding settled over me.

My eyes cut to the woods.

I visually searched for something, anything. Too dark.

Whatever was walking was approaching methodically. I had to pinpoint a direction to try to defend myself. It was nothing but impenetrable vegetation.

I back-stepped. It was now coming directly toward me.

My breath hitched as my pulse quickened.

Whatever was out there was almost on me.

Who or what was it? This was my property, not theirs. Angry, I held my ground, refusing to be intimidated. But then internal warnings surfaced. Instinct took hold.

Get out your cell phone.

I dug in my pocket. My fingers found it. I yanked it out. If needed, I’d hit 911 and run for the safety of the house.

My plan crumpled as I glanced down.

I had no cell signal.

This was a no-brainer.

I began backpedaling, then pivoted my body frontward to build momentum. As I picked up my pace toward the safety of the house, I kept looking backward, prepared to defend myself. But before I broke into a full-throttle run, something burst into the open directly in front of me.

Just as I turned my head forward to see what it was, a dark shape roughly body slammed me. Powerless to stop the inevitable, I screamed out helplessly, my arms flailing to stop my downward fall before my head struck the hard surface of the asphalt path.

Please click HERE to find Diamonds Are Not A Girl’s Best Friend on Amazon.