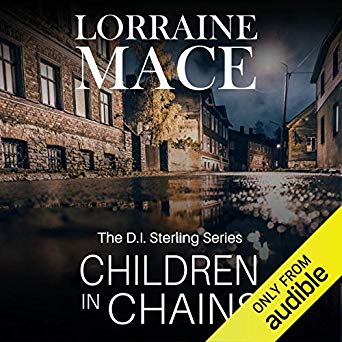 A gritty thriller that is dark and disturbing, a story of child abduction and child trafficking. Now available in Audible.

When a child is murdered, Paolo becomes aware of a sinister network of abusers spread across Europe and spanning all levels of society.

But Joey, the shadowy leader of the gang, always seems to be one step ahead in the chase.

Has Paolo come up against a criminal he cannot defeat?

Joey held the blade against Edona’s neck. A tiny line of red trickled down, collecting on the edge of her blue sweatshirt. He didn’t want to kill her. She’d always been one of his best money earners, still looking like a schoolgirl even though she was almost twenty.

He could feel her trembling against his body as he pulled her closer.

“Make the call,” he repeated.

She nodded and dialed. Her fingers shook so much Joey wondered if she’d hit the right buttons. He’d know when the call was answered. His head was close enough to hers to hear the ringing tone and then the copper’s sleepy voice.

The call had obviously woken him. Not surprising. It was five in the morning.

Joey released the knife just enough to enable Edona to speak. If she tried anything stupid, he’d put an end to her before she had a chance to betray him again.

Joey touched the knife gently against Edona’s neck; a reminder of what they’d agreed.

“I’m listening,” Sterling said. “What have you got for me?”

“Some girls, they come tonight.”

“I not know what time, but they bring them to motorway. Change van in car park outside restaurant and shop.”

“Tell me who is bringing them in. Who are you working for? I can protect –”

Joey took the phone and ended the call.

“What a kind man! He wants to protect you. It’s a bit too late for that, Edona. I wonder what else you’ve told him. I don’t suppose I’ll ever find out. Not that it matters to you now, but I’ve always been very fond of you. What I have to do to you breaks my heart.”

“And you believed me? Shame on you, Edona. I could never forgive such a betrayal. You’ve been working against me for too long now. I’ve heard you telling the young ones that they’d get free, someday.” He laughed. “You’re such a fool. For girls like you, someday never comes.”

He felt her tears dripping onto his hand.

He pulled the knife across her throat. As the blood spurted, he pushed her away, smiling as her body tumbled into the foundation pit.

“Edar, Bekim!” he called to the two men waiting by the car. “Cover her up.”

They moved forward and began shovelling rubble and sand. Joey watched for a while, but soon got bored. He went and leaned against the car until Bekim signalled for him to come back and approve what they’d done.

He looked down into the pit and smiled. There was no trace of Edona. He glanced at his watch. It was now five-thirty. The concrete was due to be poured in three hours’ time. Perfect.

“That’s cleared up that loose end. I’d wondered how Sterling seemed to know so much, but without you two pointing her out, I’d never have guessed it was Edona. Good work,” he said, smiling at the two men. He passed her phone to one of them. “Get rid of that, Bekim. Make sure it can’t be traced back to us. Right, let’s get everything in place for tonight’s delivery. Now that we know Sterling will be on the other side of town, the transfer will be, as the Brits like to say, a piece of cake. I wonder what the fuck that means, a piece of cake.” He grinned. “Talking of cake, it’s time for breakfast.”

Please click HERE to find Children in Chains on Amazon.