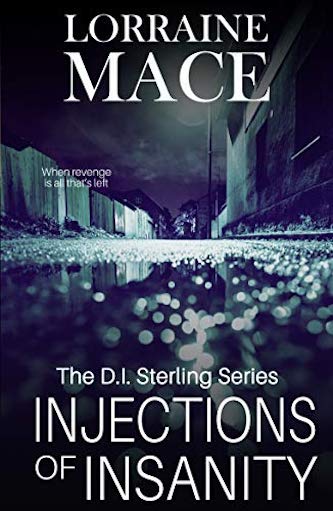 The old man’s body went into shock, trembling and twitching like a leaf in a gale.

Detective Inspector Paolo Sterling has just six weeks to solve a series of murders by insulin injection, with nothing to connect the victims except the manner of death and a note left at each crime scene.

The murderer, determined to avenge a wrong from many years earlier, gets close to his prey by assuming various identities.

Can Paolo win in his race against the pretender?

End of Chapter One – from the killer’s perspective

The door closed behind the housekeeper and the professor pointed at the tray. “How do you like your coffee? I see Mary has put out some cream. Don’t take the stuff, myself, but I know you Yanks like it. Not that you sound American. Not at all.”

Shaking his head at the offer of cream, the pretender stood up. “I’m not American,” he said. “I’m British through and through, but with the ease of internet communications, you don’t have to live in a country to work for a publication based there. I travel all over the world conducting interviews. Do you mind if I look at your books. I find I get a sense of the man from the books he keeps closest to him.”

He crossed the room to stand next to the bookshelves lining one complete wall of the study.

“Interesting collection you have here. Are they all first editions?”

“Not all,” the Professor answered, looking uncomfortable as he twisted around in his seat and peered over the back of the chair. “But many of them are. As you can see, I have a passion for history.”

“What is your favourite period?”

“The Tudors, without a doubt. From a psychiatric perspective they make a fascinating study.”

Keeping his eyes on the titles on display, the pretender edged his way along the bookshelves, moving out of the old man’s line of sight. He stopped when he was sure the professor could no longer see him and waited. Then he heard the noise he’d been listening out for – the front door closing behind the housekeeper.

The professor was droning on about the connection between megalomania and syphilis. The pretender gave the occasional word of encouragement to keep the man speaking, although he probably didn’t need to, as the professor clearly loved the sound of his own voice.

He reached into the inside pocket of his jacket and pulled out a face mask and a plastic bag. Placing the mask over his mouth and nose, he opened the bag and took out a piece of material. From another pocket he took a small plastic screw top bottle. Working quickly, he undid the top and soaked the material with the liquid. Replacing the cap, he dropped the bottle into the plastic bag and slipped it back into his pocket.

Fishing the plastic bag out from his pocket, he put the cloth and bottle into it. He removed the mask and walked over to his seat. As he sat down, he was annoyed to feel his body trembling. This was going exactly as planned. Now wasn’t the time to get squeamish. He reached down for the laptop case and laid it across his lap. Unzipping it, he fished in his pocket for the plastic bag and mask and threw both inside. Taking a deep breath and telling himself he had right on his side, he took a syringe and a vial of liquid from inside the case.

He filled the syringe and made sure there was no air at the top. That made him smile. Considering what he was about to do, worrying about putting air into the professor’s body seemed a bit redundant.

Okay, it was time. Standing up, he walked across to the old man, immobile in his drugged sleep. His hands shook. Get a grip, he told himself. You’ve waited bloody years for this; don’t stuff it up now.

He managed to get his tremors under control by deep breathing and repeating the mantra he’d been living by for the last year. Time for justice!

Stabbing the syringe into the old man’s leg, he depressed the plunger, shooting the deadly liquid into the professor’s blood stream.

Not as steady on his feet as he would have liked, the pretender staggered backwards and sat down again, waiting for the insulin to take effect.

As the old man’s body went into shock, trembling and twitching like a leaf in a gale, he wished he’d been able to leave the professor conscious, so that he was aware of his suffering. Maybe for the next one, that’s what he’d do.

Please click HERE to find Injections of Insanity on Amazon.