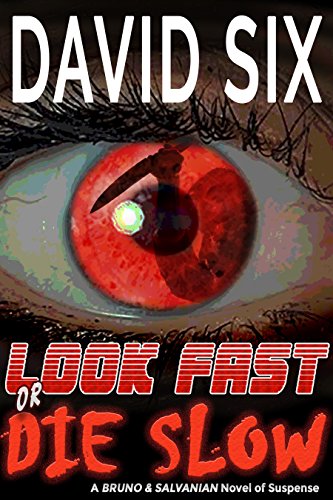 Your favorite dysfunctional investigators struggle to catch a serial killer who seemingly cannot be caught.

Former Santa Mariana police detective Frank Bruno hasn’t a clue. The murderer’s MO—skinning his victims and carving certain parts of their flesh for his gruesome use—is unlike anything Bruno’s seen in all his years as a cop. The serial killer delights in taunting Bruno—if you call leaving him notes scrawled in the victim’s blood at the murder scenes provocations:

Miss me, Bruno? the killer writes in blood. And as he closes in on Bruno, Not long now!

Bruno’s former partner, Santa Mariana PD Lieutenant Rita “Sally” Salvanian, finds herself in the unusual position of being the grownup in trying to protect Bruno while making sure he doesn’t do something stupid—like set himself up as bait for the Skinner, as the FBI dubs the murderer.

All this while Bruno tries gently to discourage a gorgeous young stalker who has become enamored with him and will not leave him alone—even after she meets his girlfriend, Emily. And while single-mom Sally gets a surprise—and unwelcome—visit from the father of her six-year-old son, Jamie.

The second book in the “Bruno & Salvanian” series, Look Fast or Die Slow, dives back into the lives of your favorite dysfunctional investigators as they struggle to catch a serial killer who seemingly cannot be caught. And as the bodies pile up, and Bruno blames himself for triggering the killer to start his vicious spree, Sally wonders if, this time, she will lose Bruno for good!

Know that feelin’ you get when you kill somebody?

It’s like Christmas mornin’, and you purty sure you gonna get that bike—that sweet Huffy you asked for with the flames and the ape-hanger handlebars—but you ain’t a hunnert percent sure? And you go downstairs, and you can see the branches a the tree before you even get to the last step, branches all shiny and glittery with red glass balls and tinsel and winkin’ lights and smellin’ like a pine forest, and it’s gosh-darn magic down there in your livin’ room, Lord ’a mercy, like wakin’ up from a dream and into a even better dream, better cause you get to live it down there in your livin’ room, sun not even up yet, just a whiff a gray leakin’ in through the windows still got the curtains closed, house a little cold, but you ain’t shiverin’ from cold, no ma’am, you shiverin’ cause your heart’s beatin’ like that hamster you used to have fore you squashed it with a brick to see what was inside, beatin’ so fast you can’t hardly catch your breath, and you jump down the last two steps, almost breakin’ your fool ankle but you don’t care, and you race around the corner into the livin’ room, your bare feet like to burnin’ as they slide across the wood floor in the hallway to the rug in the livin’ room, and you pull up short, skiddin’-like, cause you see your parents sittin’ in their chairs next to the glittery shiny tree, grinnin’ at you like clowns, big smiley clowns, and you look, pine smell fillin’ your head, and you can’t hardly believe your eyes what’s next to the tree and in their laps, cause not only did your parents get you that sweet Huffy with the flames and the ape-hangers, but they got you a gosh-darn yellow Labrador puppy too!

So— What? What you goin’ on about, girl? I just done told you what it was like. Sheesh. Now looky here—I go to the trouble and explain things to you, things a dim-bulb gash like you can’t hardly be expected to understand, but I go ahead on and do it anyways, maybe somewhere in that purty little dim-bulb brain a yours you might get a glimmer and understand, but I don’t got to explain nothin’ to you, got it? I don’t gotto explain anythin’ about why I do what I do.

Cause I just do it, is all.

Aw crapola, now don’t go gettin’ all teary and shit, cause that don’t carry no water with me. I been cried at by the best a them. By some real world-class, Olympic gold medal criers, and I got to tell you, honey, you ain’t even in the top ten. Wouldn’t matter even if you was, even if you was number one, cause I got like a what you call it, a shield or some darn thing, like armor, lets them tears roll right off. Lets all that beggin’and pleadin’ and whinin’ just roll right off. No lie. You might as well just shut your pie-hole right now, cause what’s gonna happen is gonna happen.

Now shoot. Screechin’ like a cat caught in a window fan ain’t gonna help neither. It’s like you gals is too stupid to realize there ain’t no hope. Cause once I get ahold a you, that’s it.

I got needs, see… No, not those kinds a needs, stupid twat—close your damn legs. Uck. I wanted that, I’d a taken it when I took you last night out from that bar you work at. Worked at—hah.

No, I just done finished tellin’ you, I don’t want your sex.

Now see what you made me do. I don’t like to bruise the merchandise fore I go ahead and do what I do, but you made me clock you upside the head, now you got a real purty red mark comin’ up nice on your cheek. Fact, I kinda like it—may add it to my what you call it, my repertory.

Yeah, you got nice tits, but I don’t care, so stop handlin’ them all disgustin’-like, like some porn cookie to get at me, cause I ain’t gonna touch them. Well maybe, after you dead and gone, I will, but only cause I like the way the knife sounds, way it feels when it slices through that kinda flesh still warm. You ain’t never felt that? Course not. You gotta start with a real sharp knife—like this here one I’m holdin’—work the edge till it could cut angels in half without even thinkin’ twice about it, cut them in half and they wouldn’t even know they was dead till they fell to earth, that’s how sharp.

So like I said, I ain’t gonna touch your tits, cause I don’t give two boogers about stuff like that, stuff like what you call it, pleasures a the flesh. Only pleasures I get from flesh is slicin’ it up real purty and sweet. Takin’ the best and tossin’ it on the—

Now there you go again with that wailin’, and see what you made me do! No, see. Open your eyes and look in this here mirror I’m holdin’ over your dim-bulb face. Now your other cheek’s got a purty red mark like the first. You keep whinin’ and don’t shut your pie-hole, I’m gonna run out a cheeks to bruise.

Then I gotta start somewhere else.

There, that’s better. I don’t mind that silent weepin’, no ma’am. Kinda like it, tell you the truth. Seen and not heard, that’s the best kind a girl. Just lay there and look purty. Let them tears roll down your red cheeks and plop fat and salty on the table under you.

You cold? Got all them goosepimples, I see. Well, you ain’t gonna have to worry about that a whole lot longer. See, I got me things to do. Got to get me out to Cali, got to see a fella out there.

Now shut your pie-hole and let me get to work on you. I’m getting’ hungry.

Gallery image with caption: The Mystery Writer: What happens between the first word and the last?

Gallery image with caption: Inside the Literary Mind of Mystery Writer Kelly Marshall