Sampler: Rout of the Dem-Shyr by Raine Thomas 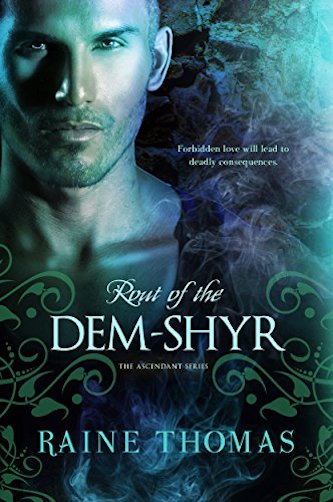 They’ll find out that sometimes love doesn’t conquer all.  It might just be the very thing that destroys them.

Touted as the future ruler and savior of worlds, Ascendant KyrVawn is ready to put her growing power to good use. She intends to begin with her home planet of Alametria, where hints of corruption have infiltrated the highest levels of the palace. It’s a monumental task, but one she won’t undertake alone.

By her side is her personal bodyguard and secret lover, Dem-Shyr TaeDane. Together, they’re determined to uncover the truth behind the changes that occurred while they were off-planet…changes that violate long-standing Alametrian laws.

But it’s hard for them to champion the rules when they don’t live by them. Their love is forbidden by official decree, and with every illicit touch, they edge closer and closer to discovery and disaster. Despite their good intentions, they’ll find out that sometimes love doesn’t conquer all.

In fact, it might just be the very thing that destroys them.

Sampler: Rout of the Dem-Shyr

Kyr looked around and saw she was in a dimly lit room. She also realized that she was sitting in a death box.

A scream built in her throat. In an instant, she was standing beside the death box rather than inside of it. She had no memory of climbing out, nor did she know how long she stood beside it, staring at it as though it could offer her answers to the long stream of questions running through her barely functioning mind.

The sound of a door handle turning sent her skittering back into the shadows. She clung to a tall column in the middle of the room and tried not to make a sound. She wished she had thought to cover the death box, but knew there was nothing she could do about it now. Hushed whispers reached her ears as the door opened and closed. Unable to resist, she eased her head around the column to see who had entered the room.

Zasha, the Wrym who had seen to Kyr’s comforts since her return to Alametria, stepped into the dim light of a wall sconce. Her hair was covered by a red scarf. She wore a simple red dress, as well, reminding Kyr that the Alametrian color of mourning was red…the color of blood and pain. The flowers Zasha carried, however, were purple. Kyr’s favorite color.

Behind Zasha walked a male that Kyr didn’t recognize until he stepped into the light: LeoVawn. The pair walked all the way into the center of the room, stopping short when their eyes adjusted enough for them to see that the death box was now open and unoccupied. The container of flowers dropped from Zasha’s hands with a jarring thud.

Kyr couldn’t stop herself from stepping out of the shadows. She had to get some answers, and the only thoughts she received from the male and female in the room were shock and confusion. Those emotions heightened when Leo and Zasha saw her and recognized her. Their eyes went wide. Their complexions turned the color of wax.

And one single thought got through: But she’s dead.

Their reactions told Kyr why she had been in the death box. “Zasha,” she said, finding her voice at last. “Where’s Ty?”

The Wrym female stood rooted in place as Kyr approached her and took her by the upper arms. Leo watched with a slack jaw, but made no move to intervene.

Kyr tried again. “Please, Zasha. Please tell me where Ty is. Where is Dem-ShyrTaeDane?”

Frustration made Kyr want to shout, but she knew anyone could be outside the doors and listening. Drawing on her growing abilities, she centered herself and sent calming thoughts to Zasha and Leo. She needed their help.

“I’m fine, Leo. You can see that. Please tell me where I can find the Dem-Shyr.”

Leo swallowed audibly before he replied, “I’m sorry to say that he’s been banished to the Dark Lands, Ma’jah.”

Kyr sifted through her still-muddy memories of her home planet. “The Dark Lands?” she repeated. “But I thought only murderers are sent there. It’s the punishment of eternal exile.”

Emotion rose within Kyr. Disbelief. Horror. Anguish. Her gaze moved between Leo and Zasha, reading only truth in their thoughts and expressions.

“But…who did he kill?” she asked at last.

“You, Ma’jah,” Zasha answered with tears in her eyes. “He killed you.”

She is the award-winning author of bestselling Young Adult and New Adult fiction. Known for character-driven stories that inspire the imagination, Raine has signed with multiple award-winning producer Chase Chenowith of Back Fence Productions to bring her popular Daughters of Saraqael trilogy to the big screen.

Raine is a proud indie author who is living the dream. When she isn’t writing or glued to e-mail or social networking sites, Raine can usually be found vacationing with her husband and daughter on one of Florida’s beautiful beaches or crossing the border to visit with her Canadian friends and relatives.

Please click HERE to find Rout of the Dem-Shyr on Amazon. 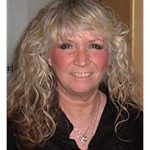 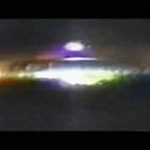 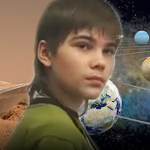