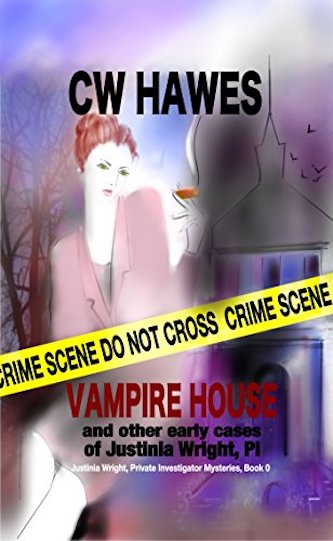 We see Justinia Wright building upon her CIA-trained investigative skills to catch villains whose egos have led them to believe they have committed the perfect crime. Read an excerpt from Vampire House.

Minneapolis’s most colorful and unusual PI takes the case.

Ace private detective Justinia Wright would rather forge a painting than take on a client. Unfortunately, painting a fake doesn’t pay the bills. Not if you want to stay out of jail, that is.

Prodded by her brother, Harry, who’s also her assistant, Justinia Wright tackles the criminals and bad people who dare to tarnish the moniker of Minnesota Nice.

Vampire House and Other Early Cases of Justinia Wright, PI is a collection of seven cases that put Tina’s “little gray cells” to the test.

Here we find an acid-spewing jack-in-the-box, a murder in the middle of a sauerkraut festival, a professor who wants to end crime by altering the human genome, a serial killer who believes he’s a vampire, and other perplexing puzzles demanding a solution.

Mystery, mayhem, and murder await, all sprinkled with a liberal dash of humor.

What are you waiting for?

I announced supper was ready and Tina and Cal joined me in the dining room.

“Cal, tell Harry what you told me.”

We sat down and began dishing up food.

“Ever hear of the goth club Crypta Mortis?” Cal asked.

“It’s in Uptown. On Lagoon. Actually in the sub-basement beneath The Brandywine.”

“This afternoon we get a call. Someone was hauling out trash, apparently getting ready for tonight, and found a body in the dumpster.”

“That’s the pits for whoever was dumped off as garbage,” I replied.

“Yeah. He had half his neck bitten out and been drained of most of his blood. Sometime in the wee hours of the morning.”

“Isn’t it, though? What’s more, the drummer for the band playing the night before believes he’s a vampire and is known to regularly drink human blood.”

“Really? There sure are a lot of wackos out there.” I looked at my wine glass. Thank goodness we were drinking white wine. I took a sip.

Cal went on. “Tell me about it. We questioned the drummer but he only partakes of the blood of his own girlfriends and mistresses. And apparently there are plenty of witnesses who can testify he doesn’t drink male blood.” He shoveled in a forkful of Colcannon.

Tina, fork in midair, asked, “Do you know who the victim is?”

“And someone actually took a bite out of his neck?” I asked.

“That’s what it looked like. Hornick damn near threw up.”

A ghost of a smile appeared on Tina’s face. “Your sergeant always looks a little green around the gills in the presence of the dead.”

“Need to toughen him up. The medical examiner has yet to weigh in. We’ll know for sure when he does.”

“A far more exciting day than we’ve had for awhile,” Tina said.

Cal took a sip of wine. “To be honest, I’d prefer less excitement. In fact, no excitement is best. No one dies and I still get paid.”

With a sweet smile on her face, Tina said, “You’ll keep me posted, Sweet Cheeks?”

“Sometimes I wonder about you, Wright. Everyone else I know, including me, doesn’t really want to know more. Then there’s you.”

She shrugged. “Must have been the torture I endured at the hands of a very virile Russian interrogator.” Her voice became sultry, with a mock Russian accent. “Does things to a woman. Makes her want things.”

Cal shook his head. “Peddle it on down the road, Wright. You aren’t fooling me. I know what you like and it ain’t that. You just want to horn in on my murder because you’re bored. Maybe you need to chase an ambulance or something.”

She put on a pout and a Southern drawl. “Why Lieutenant Swenson, I don’t understand a thing you’re talking about. Lil’ ol’ me would never do such a thing. I’ll just wait until you ask for my assistance.”

Cal looked at me.

Back to her normal voice. “I was not spoiled, Harry, and you know it.”

Cal busted up laughing. Something he doesn’t often do. We joined in and when we were done, we talked about maybe visiting the Huntington and the La Brea tar pits this summer.

Dessert was homemade treacle pudding. Something Cal had never had before, and when we were finished, our man in blue bid us a good night.

Tina helped me clean up the dishes and put them in the dishwasher. After which we retired to the living room.

“I do hope Cal keeps us posted, Harry. This case of his sounds very interesting.”

“Personally, it’s a bit too gruesome for my liking.”

“No. I’d just rather not know how sick people too often are.”