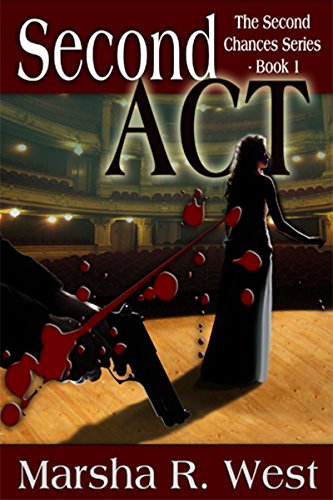 The theme of Marsha’s seven romantic suspense books is always second chances. She has a four-part series titled The Second Chances Series. She believes in Happily Ever Afters.

Her husband picked up a plaque for her on one of their several trips to Maine that states her philosophy exactly. “Everything will be all right in the end. If it’s not all right, it’s not the end.”

The Heroines and Heroes in her books are in their 40s and 50s with their parents and children often playing supporting roles.

She lives in Texas with her supportive lawyer husband. Their two daughters presented them with three delightful grandchildren who live nearby. They share their home with Charley, a Chihuahua/Jack Russell Terrier mix.

She’d love to hear from you and would appreciate reviews. Contact her at marsha@marsharwest.com

When a member of the board of a non-profit arts agency in Fort Worth turns up dead, the homicide detective assigned to the case looks at everyone involved in the organization, including the Executive Director.

Addison Jones Greer, a divorced mother of two teens, is the Executive Director of Cowtown Theatre. When a board member is found in the costume room murdered, suspicion rests on everyone involved with the theatre, including Addie. She has angered some board members because she wants to fire the Artistic Director.

Although she’s warned him several times, he continues to go over budget for productions.

Mike Riley, Fort Worth homicide detective, hates that he caught this case. His sister-in-law dragged him to a theatre fundraiser where he met Addison, the first woman he’s wanted to pursue a relationship with a long time. Not about to happen now.

Addison hasn’t ventured into romance since she caught her now ex-husband in their bed with his secretary. As a result, she doesn’t do trust. How could she trust someone who seems determined to think she’s capable of murder? Or worse, thinks her kids might be involved.

SECOND ACT is Book 1 of the Second Chances Series. We meet four women, now in middle age, who’ve been friends since they met at summer camp after second grade. Whether they realize it or not, they all need a second chance. 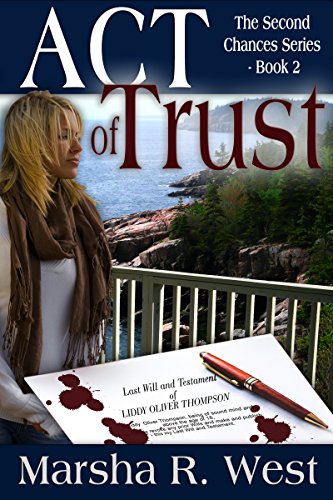 A widow since 9/11 and the mother of a grown daughter, Kate Thompson wants to keep her and her daughter safe, but the inheritance of land in Maine pushes her out of her comfort zone in Texas and into the arms of a Maine lawyer.

Maine lawyer and environmentalist, Jim Donovan wants to protect Aunt Liddy’s land and keep it from falling into the hands of the developers, but first, he has to convince Kate Thompson she should hold on to the family land when she doesn’t even want to go look at it.

However, he’s unprepared for the attraction each feels for the other, but denies exists.

Will they be able to settle the land deal before anyone else is killed or they break each other’s hearts? 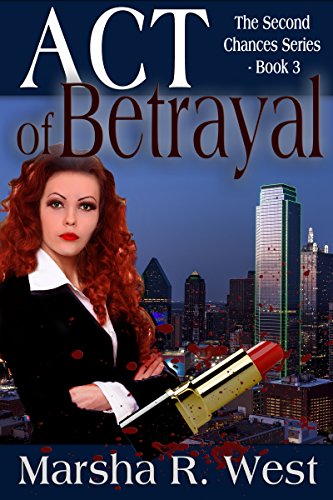 A cosmetics company owner in Dallas, Devon Moore, wants to save her company from bankruptcy, but her ex-husband’s embezzlement sends her into dangerous waters trying to pay back his clients, replace the money he stole from her company and keep her, her daughter, and her parents safe.

Private Investigator, Brett Townsend, wants to find who is threatening his new client and locate the missing money. He suspects the beautiful Devon hasn’t been completely honest with him.

A wife has to know, doesn’t she?

When she is attacked twice and her daughter is kidnapped, he decides he must adjust his thinking.

Despite Brett’s initial doubts about whether Devon really knew about the money her ex-husband stole, still, he’s attracted to the redheaded beauty and admires her love of her daughter for whom she will do anything. Their attraction for each other sizzles under the surface of all they do.

Will they reclaim the hidden money and find the bad guys in time to save her business and the lives of her daughter, her parents, and Devon?

Gallery image with caption: My Review of Love’s Enigma by Breakfield and Burkey

Gallery image with caption: Carmen DeSousa: One of the Top Ten Writers of Romantic Suspense You Need To Be Reading

Gallery image with caption: Brigitta Moon: One of the Top Ten Writers of Romantic Suspense You Need To Be Reading

Gallery image with caption: Uvi Poznansky: One of the Top Ten Romantic Thriller Writers You Need To Be Reading