Inside the Literary Mind of Kelly Marshall 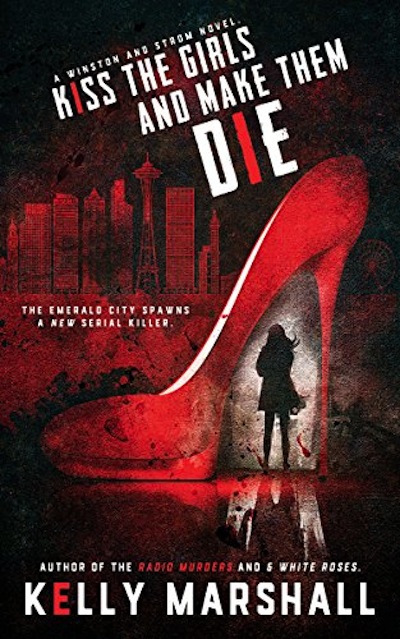 I love the mix of romance and murder. My mysteries are salacious and sexy.

As a child, Kelly Marshall always thought she would communicate in the world as a writer and someday pen a great novel. But life took a left turn and instead, Kelly ended up at broadcasting school.

She spent the next thirty years spinning records, interviewing people, doing love song dedications and having a ball at radio stations in Virginia, Colorado, Oregon, South Dakota and Washington.

After thirty years, she walked away from the microphone and decided to do what she had always wanted to do . . . write. Kelly lives in the Pacific Northwest with her grandson, Dawson.

A reviewer wrote of Kiss the Girls and Make Them Die: Kelly Marshall writes compelling mysteries and dares you to come along for a ride you will never forget. Tension traps you immediately, then the intensity is strangled with fear.

Detectives know a murderer will strike again, and time, like life itself, is a precious commodity that is quickly running out. Each new sundown may be someone’s last. Kiss the Girls is a haunting, terrifying journey, and I dare you to breathe during the final fifty pages.

Question: Are you a full-time author?

Kelly: I should be so lucky. No, I have a mortgage and am raising a grandson, so I need a steady income. I am not at a place yet where publishing is providing all my income.’

Question: What’s the name of your new book?

Kelly: Kiss the Girls and Make Them Die.

Question: Is Kiss the Girls and Make Them Die a stand-alone book or part of a series?

Kelly: This is the third book in the Winston and Strom Murder Mystery Series. The first book was The Radio Murders, followed by 6 White Roses a year later.

Question: What’s unique about Kiss the Girls and Make Them Die?

Kelly: Seattle is one of the most gay-friendly cities on the West Coast, perhaps second only to San Francisco. After two lesbians are found dead in their beds, the Seattle Police Department are disturbed by the uncanny similarities between the cases. After a third death where the victims are slaughtered and parts of their female anatomy are excised, Seattle homicide detectives Nick Winston and Pat Strom are confident they died at the hands of deranged serial killer.

Question: How would you describe the relationship between the two homicide detectives?

Kelly: Nick Winston is a charismatic fellow who is more than a little politically incorrect. He’s dark, he’s dreamy, and women press their phone numbers into his hand. He has been known to “kiss and tell.” His partner, Pat Strom, is his polar opposite. Pat is gay and keeps her private life very secret. Trouble erupts in The Radio Murders when both cops fall head-over-heels for bisexual radio star, Jasmine James. And so my venture into the dangerous underbelly of murder mysteries began. I became hooked on love and death.

Question: What makes your particular brand of romance special?

Kelly: I love the mix of romance and murder. My mysteries are salacious and sexy. I love to keep the action moving both in the bedroom and the squad room.

Question:  Where do you find the inspiration for your stories?

Kelly: It bubbles up from some strange place in my brain. I just open the valve and let it flow.

Question: What authors inspire your writing?

Kelly: Anne Rice will always be at the top of my list of admired authors. The sensuous, decadent detail in her vampire novels is simply amazing and her colorful descriptions of the Garden District in New Orleans were so vivid, I could smell the fragrant bougainvillea. Romance writer, Sandra Brown is another. I always learn from her sex scenes. She can write them smooth and sexy, but classy.

Kelly: I spent a LOT of money on writer’s conferences. I polished my elevator pitch and learned to assault agents and editors in hallways, elevators, and yes, even bathrooms. I was never comfortable with that process. I got a few nibbles but nothing that ever came to fruition. I queried agents and publishers on the Internet regularly and eventually nabbed an agent. That relationship lasted a year, but she never secured a publisher for me.

Tired of playing the traditional game, I decided to ePub my book. I sold a few copies and felt good that it least it was “out there.” But sales were minimal. An online publisher found me and we developed a great relationship. Unfortunately, he went bankrupt and I was back to square one wondering whether I should self-publish again or find another publisher. A fellow author introduced me to White Bird Publishing in Austin and I am very pleased to be with them now.

Question: What type of book do you like to read?

Kelly: I prefer a juicy who-dun-it. I am eager to see if I can solve the mystery before the author does the big reveal.

Question: What is your absolute favorite book or books and why is it special to you?

Kelly: My all-time favorite is The Thorn Birds by Colleen McCullough. The pull of forbidden love was heart-wrenching and enticing. I must admit I love 50 Shades of Grey too. Initially, I read about fifty pages and thought, wow, there’s sex on every page. This is over the top. I was vocal on social media about what a lousy book it was and advised everyone to save their money. After a few months, I picked the book up again and gave it a second chance. I became entranced with the love story. Christian adored Anastasia, just like Edward worshiped Bella. Women ache to be cherished. That hooked me.

Question: What celebrity would you chose to play the main character(s) in the movie rendition of Kiss The Girls and Make Them Die?

Kelly: Jamie Dornan as Nick Winston. He’s just hot, hot, hot. Emily Blunt as Pat Strom. Blunt is such a talent actress, she could play a tough, lesbian cop that puts Nick in his place.

Question: Have you won any awards for your writing?

Question: What is the hardest part of the writing process for you?

Kelly: Editing is the most time-consuming and challenging.

Question: What is the easiest part of the writing process for you?

Kelly: Is there an easy part? I haven’t found that yet.

Question: Which of your characters is your favorite and why?

Kelly: Tandy Williams is Nick’s girlfriend in this book. She is raucous, sexy and very creative in the bedroom. She is just plain fun to write.

Kelly: My novels are spicy and the fast-paced. To bore my reader would be the kiss of death.

Question: When did you know you truly wanted to give writing a shot?

Kelly: I spent years in broadcasting, and believe me when I say that was tons of fun. But my deepest craving was to write.

Question: What is the one question that you wish people would ask you: What do you get out of writing?

Kelly: I love the creative process. I just dig words and molding them together to create a wonderful sentence excites me.

Please click HERE to read more about Kiss the Girls and Make them Die.