It was his story until she took it away from him. 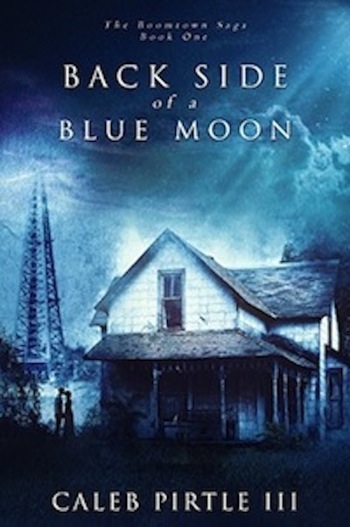 No one ever really knew what had happened on the back side of a blue moon.

But they fascinate me.

I met a lot of them back in the days when I was a police reporter for the Fort Worth Star-Telegram.

They never met a stranger.

They didn’t beat the odds.

And they were damn good at it.

So I wanted to write a novel about a con man back in the early 1930s when people had to make a living any way they could.

The cloud of the Great Depression hung dark like a funeral shroud around them.

So I created Doc Bannister.

And I wrote of him:

DOC BANNISTER WAS an illusion. Waskom Brown had him pegged a long time ago. But then, Waskom Brown was the only daddy Doc ever had, and Doc was twenty-five years old before he crossed paths with Waskom in a Hot Springs house of ill repute, and Doc would be dead as hell if Waskom hadn’t come along when he did.

A man peddling doodlebugs to farmers, who prayed for oil now that the water had dried up, needed a partner if only to drive the getaway car, and getaway cars were not always plentiful when the doodlebug exploded and sprayed sand instead of oil across the stunted cotton stalks.

If that black doodlebug box, filled with wires, dials, lights, buzzers, and whistles, could have found oil, then Doc would have been a rich man instead of a wanted man, and those who wanted him were usually dead set on killing him. They had burned or buried a lot of his doodlebugs along the way and were always within an eyelash of burying Doc.

Instead, he was on the run, traveling from one con to the next scam, and the back roads could run out pretty fast for a man during the troublesome patchwork years of the 1930s. He could find only two things at the bottom of a hole in those days, oil or worms.

It was Doc’s story.

I started writing and figured I would find out in time to slap an ending on the story.

I wrote of her:

She had been a fine looking lady in her early twenties. Just about everybody in Ashland said so. Tall. Slender. Flaming auburn hair that draped elegantly across her shoulders. It was said from the front pew of the Baptist church to the front porch of Jim Hamilton’s Dinner Bell Cafe, that Eudora possessed a winsome smile as warm as mid-day in August. Feel bad? Feel blue? Feeling sorry for yourself? Just wait ‘til Eudora comes walking by and smiles at you. You’ll be cured between good and morning.

She hardly ever glanced at her reflection anymore.

Somewhere during the last ten hard and unforgiving years, she misplaced her smile, then lost it altogether, and discovered she had no need for one. What was a smile anyway? Not much more than a scar on her face, and she could turn the corners of the scar down much easier than turning them up.

The belle of the ball was no longer invited to the ball.

Doc was standing around in his white suit and straw boater smiling and hustling.

Eudora took the story away from him.

And he didn’t mind at all

Doc didn’t even pay attention to the rumors that swirled around Eudora.

Where was her husband?

Had she killed him?

Where was the body?

And when she smiled at him he didn’t care.

No one ever really knew what had happened on the back side of a blue moon.

Please click HERE to find Back Side of a Blue Moon on Amazon. It is a Beverly Hills Book Award Winner.