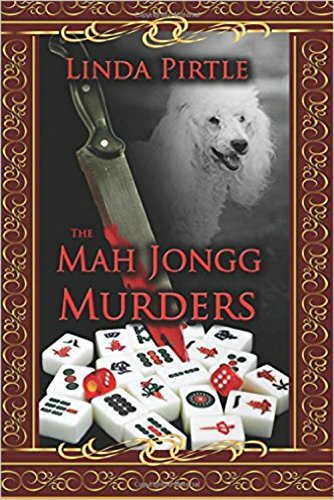 THE MAH JONGG MURDERS is full of long-hidden secrets, relationships that aren’t quite what they seem, and people running from their pasts. Read an excerpt from Linda Pirtle’s debut cozy mystery.

Lillian Prestridge and her husband Bill are introduced to Eli, a standard Poodle when he leads them to the scene of a heinous murder in their normally quiet, gated community in the heart of East Texas. Lillian lends her investigative instincts to her son Jake, County Sheriff, and his best friend, Grant Perryman, Chief of Security at Leisure Lake as they try to solve not one murder, but two, in the first of Linda Pirtle’s Christian novels: The Mah Jongg Murders.

THURSDAY MORNING, THE county sheriff sat at his desk reviewing the report the medical examiner had given him earlier. He frowned when the phone on his desk buzzed. He picked up the telephone receiver, pushed the intercom button.

“Sheriff, there is someone here to see you,” his secretary, announced.

Nora looked up and winked at the tall, stately woman who smiled back. “She says she’s your mother.”

Jake took a deep breath. “Send her in.” Knowing how doggedly his mother would try to solve the murder at the lake, he did not look forward to the challenge of fending her off the case.

Lillian, with her long, gray hair pulled back in a ponytail, walked in leading the poodle who, upon seeing Jake stand and walk toward them, positioned himself between the two in a protective stance. Teeth barred, he let out a low, menacing growl.

Instead of hugging her son, Lillian stopped three feet away from him and blew him a kiss. She then reached down, patted the poodle.

On command, the dog wagged his tail and sniffed the hand that Jake extended. Then the sheriff bent down to scratch Eli behind his ears and, looking up at his mother, said, “I knew you would show up here sooner than later.”

He turned and walked back to his desk, sat down, and closed the file folder labeled Jane Doe. He motioned for his mother to sit in one of the blue leather chairs facing him.

She got right to the point. “Has Grant called you? Have you received anything from forensics or the medical examiner?”

“Yes, I’ve heard from both of them. Grant, Will Ogburn, and I have a meeting scheduled for one-thirty this afternoon.”

“Good. How long do you think it will last? I need to meet with you two boys to discuss the case.”

“What if I have some information that might help you identify the woman who was murdered?”

Jake decided not to take the bait. “Mom, I know the incident at the lake will have your brain in overdrive trying to help me and Grant solve the crime, but I want to go on record right now. Stay out of it.”

“Please take our advice. There’s a murderer loose at Leisure Lake, and I don’t want you to become the next victim.” Jake sat still. He gripped the armrests of his chair and braced himself for her to argue with him.

When she didn’t, he asked, “I can tell you’re thinking about your comeback to what I just said, so go ahead. State your case, but understand this: It won’t do any good to argue about it. I’m ordering you to stay out of it and let me handle finding the culprit.”

Lillian looked at him and with a sly smile, said, “Let’s forget about that right now and start all over with this conversation.”

Jake laughed. “Okay, but only if you promise me you will not put yourself or Dad in danger.”

Jake looked at her, nodded in agreement, and began a new conversation. “Hi, mom. To what do I owe the pleasure of your visit today? I hope it’s to take me out to lunch.”

Lillian played along with him.

“Hello, Darling, yes, let’s do lunch. My treat. Where would you like to go?”

“I don’t care. Just something quick. I do have several meetings scheduled this afternoon.”

“What about the new Corner Bakery that’s just opened? It’s within walking distance, has healthy food for me, and hamburgers and fries for you.”

“Sounds good to me. And, one additional feature you will love, Mom, is that the owner of the bakery is considerate of customers who walk their dogs.”

“He’s provided a space beneath a wide awning that covers the sidewalk in front of the bakery where pets can wait for their owners. And, there’s a water bowl and a place where you can attach Eli’s leash. They’ve thought of everything, haven’t they?”

“Well, Eli, what do you think about that?” Lillian asked the dog. Both she and Jake laughed when Eli responded with a doggy snort. “That settles it. Let’s go.”

As they exited the building, Jake decided to cut to the chase and try again to dissuade his mother from getting involved in the case. He stopped walking to look her in the eye as he cautioned her.

“Mom, as I said before, I know you are going to try to get information from either me or Grant or both of us about the body you and Dad found.” He held up a finger to stop her from interrupting. “So, before you begin, let me say this: I don’t know anything yet. Grant, the M.E., and I will meet this afternoon, but in the meantime, until this case is solved, I want you and Dad to be alert and aware of everything and everyone you come in contact with at the lake.”

“Son, don’t you think that we may have already thought of that?”

“I’m sure you have, but I just wanted to express my concern. That’s all.” He took her by the elbow as they resumed their slow pace down the sidewalk and continued their conversation.

“To be honest with you, when your father and I were at the gym yesterday, I could hardly concentrate on my exercise routine. I kept looking at everyone, wondering if one of them could be guilty. I even considered old Mr. Simms,” said Lillian.

“Simms? Your imagination must have been in high gear. Poor old guy, he’s been on portable oxygen for the past year and a half. If he only knew what you were thinking.”

“I know. I feel guilty thinking about him as the culprit. I decided to get control of my thoughts.”

“Good. Again, remember: be cautious and alert at all times.”

“I will. I promise,” she said, “but I keep thinking about the situation and the fact that everyone who goes to the gym might have done such a terrible thing. In my opinion, they are probably the only people living at the lake who are fit enough to overpower someone.”