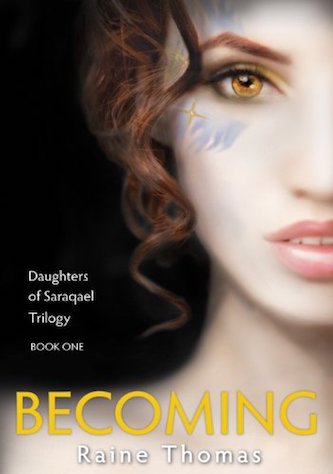 Here’s a book that will rock your world, make you smile, and keep you guessing. Read an excerpt from a stunning coming of age, paranormal, fantasy from Raine Thomas.

Every three years, Amber Hopkins explodes. Okay, not a blown-to-smithereens explosion, but whatever it is always hurts like hell and leaves her life a shambles. She’s already worked her way through five foster placements, and she’s doing whatever she can to avoid getting blasted into a sixth.

As her eighteenth birthday approaches and she feels the strange and powerful energy building, disaster looms. When the inevitable explosion occurs, her life gets its biggest shakeup yet. She’ll not only learn how her fellow foster and best friend, Gabriel, really feels about her, but she’ll discover that she isn’t really without family.

To top it all off, she’ll finally find out why she’s having the power surges: she isn’t entirely human.

Amber must Become, transitioning to another plane of existence and risking the loss of the most important relationship she’s ever had. Her choice will impact the future of an entire race of beings, and will pit her against an enemy that will prey upon her doubt to try and take her very life.

Kind of makes the explosions now seem like a cakewalk.

The surge grew stronger as her anger and stress escalated, and Amber knew she was in trouble. She felt the snaps of energy starting in her chest, pulsing with the strong beats of her heart. As her panic grew, the crackle of energy grew … an unstoppable spiral that she knew would result in something disastrous.

She had to get out of there. Had to. But she couldn’t move.

And then Gabriel was at her side. He didn’t acknowledge Michelle, but instead reached up and lowered Amber’s sunglasses enough to look at her eyes.

“Okay—we’re out of here,” he said, pushing her sunglasses back up.

Alicia and Cornelius approached as Gabriel took Amber’s arm and started for the back gate. Alicia asked with concern, “Is Amber okay?”

“She’s fine,” Gabriel lied as they hurried toward the gate. “Just a slight allergic reaction aggravated by stress. I’ve got her medication in the car. She does better away from crowds.”

“Gabriel.” Amber hardly recognized her own voice. It was croaky and panicked. The vibrations shaking her arms continued to increase in violence. This could not be happening.

“Hang on,” was his response.

They ignored everything and everyone around them as they burst out the back gate and hurried through the parking area. Their car was wedged in among other cars in the Brewers’ makeshift parking arrangement. They’d have to do this on foot. Fortunately, the only people out front were about twenty yards away and thus far had their backs turned.

Her voice was an anguished question now, and would normally have embarrassed her. Only a few seconds had passed since they left the backyard, but the tremors now shook her entire body. Obviously sensing she was reaching a critical point, he bent over and slung her over his shoulder. Then he started running as fast as her added weight would allow.

“Hang on,” he instructed again, breathing harshly and dodging trees as he ran.

She couldn’t breathe. Her body was now outside of her control. She wanted to scream in agony as the surge threatened to overtake her. And even as she knew Gabriel was her only hope, she feared for him. Didn’t want him anywhere near her. She would kill him.

Just as her entire body started convulsing, he burst through a clearing leading to a pond. The sight flooded her with relief even as the pain burst through her chest.

Her brutalized cry was nothing but a thought, but she somehow knew that he heard it as though it had ripped from her throat. Without pause, he plowed straight forward. They plunged unceremoniously into the pond, and she managed to take hold of her senses enough to wrap herself around him so that their combined weight would drag them further under the water as quickly as possible.

Then the world exploded.